Residents Bill and Barbara Doughten received an anonymous handwritten note from a real estate agent who took offense to them parking the car on the front lawn of their property.

Apparently the elderly couple parked their car sideways on the front lawn instead of using their driveway, something that can be seen as crude to some. 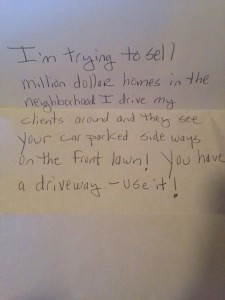 Unfortunately, the real estate agent didn’t take the time to investigate the why of the matter, and instead left the scribbled note expressing his or her disgust for the seemingly tacky move.

The agent expressed intense frustration in having trouble selling million-dollar homes because of the unsightly parking situation, writing, “You have a driveway – use it.”

But little did the individual know that the reason the homeowner parked on the lawn was because of their old age/health, with the lawn parking spot making for a shorter trip inside the home.

After receiving the note, the incensed granddaughter of the couple took to Facebook to set the record straight.

Stephanie Powley asked whether the agent actually took the time to think before writing the note, and called the person a “true coward” for staying anonymous.

She added that her grandparents have been living in the home for longer than the agent has probably been alive, noting that the rest of the community understands the parking situation and has no problem with it.


I felt this story was noteworthy (no pun intended) for a few different reasons. For one, writing a handwritten, inflammatory note, as opposed to knocking on the door or writing a formal letter, seems very unprofessional.

In fact, it could be seen as on par with someone who parks their car on the front lawn, assuming they don’t have a good reason to do so.

So in that respect, by penning the note the agent was essentially acting in the very same way that they loathe.

Second, it makes you wonder if real estate agents sometimes go too far. I get it; agents have a big job to do. They need to sell prospective buyers on a neighborhood that is often foreign to them.

And when we’re talking about million-dollar homes, it can be embarrassing when you turn the corner and see a car on the front lawn. Or some other eyesore.

But agents should also remember that these neighborhoods belong to the residents, not the agents who often live miles away and are only there for a month or so to sell a property and move on.

Sure, this was just one agent, and not representative of an entire group of people, but perhaps it’s a good lesson for the rest of them. Heck, they could have even earned a referral in the process if they handled it a bit differently!