A record portion of California home sales were paid for with cold, hard cash last month, according to a report from DataQuick.

The company said 30.9 percent of all new and resale houses and condos sold statewide in January were purchased sans mortgage.

That’s the highest level in at least 23 years (their stats go back to 1988) and well above the 28.9 percent cash-share seen in December and the 27.8 percent share a year ago.

Cash buying also hit an annual high last year in the Golden State, with 27.8 percent of all homes sold paid for in cash, up from 26 percent in 2009, which was the previous annual record.

But California wasn’t the only state where buyers paid in cash – homes purchased with cash climbed to peak levels in DataQuick’s statistics across the majority of the Western U.S., including the Phoenix, Las Vegas, Reno, Denver, Portland and Seattle regions.

Over the past decade, cash buyers purchased a monthly average of 13.9 percent of homes sold in California, though that number has been above 20 percent since November 2008.

This could have to do with all those foreclosure sales, as about 52 percent of the homes purchased with cash in January had been foreclosed on in the prior 18 months.

That compares to the $239,000 median for all homes sold statewide during the month.

Data also indicated that more than half of cash purchases were tied to investment properties.

Note that the all-cash deals were transactions where there was no indication of a purchase money mortgage recorded at the time of sale, but some buyers may have used alternative financing, such as taking out mortgages after the initial purchase. 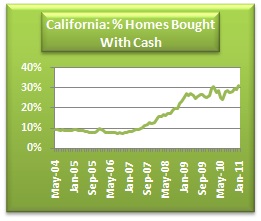