While 2020 continues to surprise us, somehow, someway, home sales are expected to hit their highest point since 2006 this year.

This, despite an ongoing worldwide pandemic and a contentious U.S. presidential election that’s less than a month away.

You’d think those types of events would give prospective home buyers pause, but they could actually be accelerating peoples’ plans. 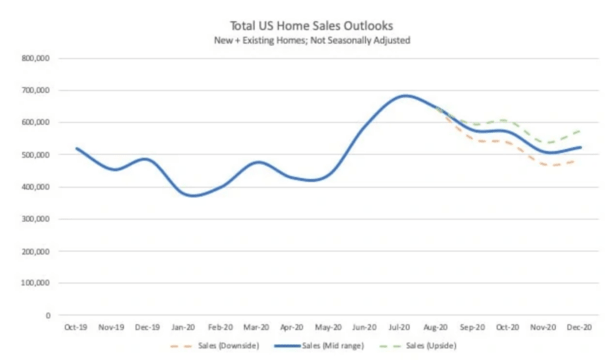 While the year 2020 certainly got off to a rocky start, and resulted in obvious disruptions during the traditional spring home buying season, we appear to be back on track.

That’d make 2020 the best year for home buying since 2006, back when real estate was flying high, and only years before it all came crashing down and ushered in the Great Recession.

This doesn’t mean we’re doomed once again – things were a lot different back then, namely mortgage underwriting guidelines.

Today, there are still zero down mortgage options, but they require full doc underwriting that takes into account your income, assets, and employment.

Of course, there are still lots of loan programs out there that only require questionably-low credit scores, like FHA loans and VA loans, but I digress.

Redfin actually has a few different outcomes for home sales, including a low-end forecast of 6.08 million homes sold, which would still be 1% more than 2019.

And a high-end forecast of 6.4 million, which would be 6% more than 2019. It’s all pretty impressive given the year we’ve had.

The obvious answer might be record low mortgage rates, which are making it more appealing (at least emotionally) to purchase a home.

The other reason might be the desire to move somewhere that offers more space, such as a home in the suburbs versus an apartment in the city.

It seems the pandemic has caused folks to take a hard look at their situation, and perhaps seek out more stable living conditions.

Home sales had also been trending higher for the past few years, and with millions of Millennials and Gen-Zs coming of age, there are lots of tailwinds.

As I wrote a while back, 45 million Americans are going to reach the typical first-time home buyer age of 34 over the next decade.

This, coupled with limited inventory, will make home buying competitive for the foreseeable future, and supports my argument of skipping the starter home.

That might be especially true now that “more space” is high up on the list of home buyers wants and needs.

With regard to how the presidential election could affect home sales, Redfin notes that past elections have had minimal impact.

Since 1980, home sales actually increased an average of 0.4% in October and November of presidential election years versus non-election years.

But in the December of election years, the month where sales would likely close for offers made during November, sales typically fell an average of 1.5%, but quickly recovered by the same amount in January.

Of course, this isn’t just any year, so we’ll see how things play out.

Redfin surveyed home buyers and found that only 13% of respondents said the upcoming election has made them more hesitant to buy or sell a home, which was down from 20% in November 2019.