There have been plenty of reports about lower-income borrowers getting the short end of the stick during the latest housing downturn.

And a new National Housing Survey from mortgage financier Fannie Mae might reveal why.

Based on the second quarter data in the report, it appears as if those with annual incomes of less than $50,000 are more likely to take someone else’s “word for it,” as opposed to doing their own research.

In fact, 30% of respondents in the survey defined as being “lower income” borrowers indicated that a mortgage broker’s recommendation would be a major factor in choosing a lender.

Lower income borrowers were also more than three times more likely to rely on lender advertising than the wealthiest group.

Conversely, the richest of borrowers were most likely to be influenced by the competitiveness of the offer received.

So basically just more than half of low-income borrowers seemed to care what their mortgage rate was. 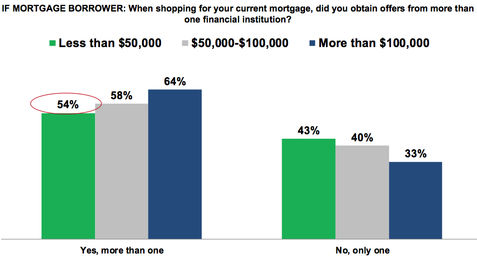 Wealthy borrowers also indicated that when shopping for a mortgage, they were more likely to obtain quotes from multiple banks and lenders.

I’ve said it many times before, and I’ll say it again, shop around! If you take the time to shop around for your big screen TV, surely you can shop for your mortgage.

Interestingly, lower-income borrowers were more likely to obtain mortgage quotes, or should I say their single quote, in person, whereas top earners did it by phone and seemed to get a better deal.

So much for that face-to-face trust perception…

[How many mortgage quotes should I get?]

When it came time to decide how much one could afford, the richer borrowers were more likely to whip out a calculator.

Meanwhile, the majority of lower-income borrowers made calculations in their head or on a piece of paper.

They were also much less likely to use online tools or applications (mortgage calculators) to figure it out, despite these being readily available to anyone with an Internet connection.

Regardless of income, no one seems to understand how adjustable-rate mortgages work.

When respondents were asked to determine how much an ARM payment could rise, 37% of mortgage borrowers weren’t even able to offer up a guess.

On average, respondents estimated that mortgage payments on ARMs could only rise by about 10%, well below Fannie’s calculation of over 50%.

Clearly, ARM payments can reset a lot higher than 10%, though the mortgage caps in place limit those increases (and decreases) somewhat.

Fortunately, most borrowers these days are going with fixed-rate mortgages to avoid any misunderstanding.

The moral of this survey, like many before it, is that Americans continue to miss the mark when it comes to understanding how mortgages work.

This is unfortunate, given buying a home is often seen as the largest purchase an individual can make in their lifetime.

Perhaps poor financial education should be added to my lists of causes of the latest mortgage crisis.