Once left for dead, the mortgage broker is alive and well. And in fact, thriving.

There are now more than 100,000 mortgage brokers in business, per the latest jobs report from the U.S. Bureau of Labor Statistics, an increase of 20% from a year ago.

And it only appears to be getting better for the mortgage broker, as large shops continue to embrace them as either a complement or alternative to retail.

That’s a stark contrast to the trend seen less than a decade ago, after the prior housing boom quickly turned mortgage bust, with brokers the first to be blamed. 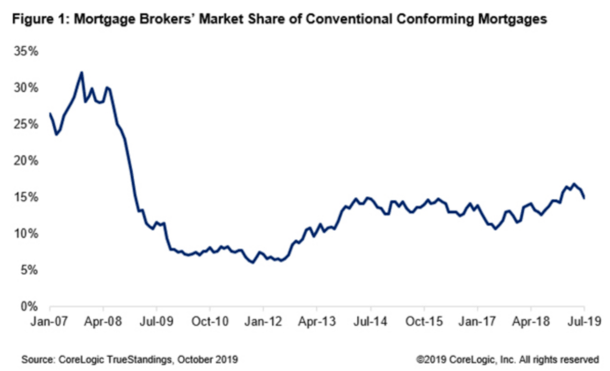 Back in the early 2000s, mortgage brokers were all the rage, accounting for a large chunk of the overall mortgage market.

Pretty much every major depository bank and large mortgage banker had a wholesale lending division. And if they didn’t, they quickly created one.

There was such a strong appetite for mortgage backed securities on Wall Street that it was a virtual no-brainer for a mortgage firm to rapidly boost loan volume by enlisting third-party brokers.

This led to a near-35% mortgage broker share back in 2008, at least with regard to conventional conforming mortgages, per data from CoreLogic.

It could have been even higher if you factor in jumbo home loans and non-conforming loans, both of which were also popular with both homeowners and brokers at the time.

But before long, they were the first to be blamed for the crisis, despite acting as middlemen and women who resold product for larger banks and lenders.

As quickly as banks launched wholesale divisions, they were closing them in record numbers, and it was wholesale that often the first to go.

Many of the very first closed mortgage lenders on my expansive list were wholesale lenders.

After all, it was easier (and made more sense) to shut off operations that didn’t take place under your own roof.

Since banks felt like they had less oversight, and some of the broker-originated mortgages may have performed worse, they turned off the spigot.

Simply put, without wholesale lenders, there are no mortgage brokers. And that led to their decline, with a market share of just seven percent in 2011.

The final nail in the coffin came when former number one mortgage lender Wells Fargo exited the wholesale mortgage channel entirely in July 2012. 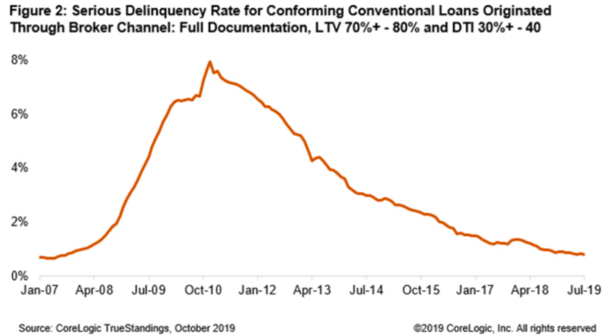 A lot has changed over the past eight years. Today, two of the largest mortgage lenders have robust wholesale lending divisions.

I’m referring to United Wholesale Mortgage (UWM), which has come out aggressively in recent months with its Conquest program, offering mortgage rates as low as 1.99% on the 30-year fixed.

Their impressive growth over the past few years has gotten the attention of crosstown rival Quicken Loans, which has also been expanding its wholesale unit recently.

In fact, they just changed their name from Quicken Loans Mortgage Services to Rocket Pro TPO, which stands for third-party originator.

Mortgage brokers have also enjoyed more public advocacy lately, thanks to groups like the Association of Independent Mortgage Experts (AIME) and their simple slogan, “Brokers Are Better.”

The question now is how much market share will mortgage brokers grab this time around. Will they be even bigger than they were in the early 2000s?

The answer will likely be driven by loan quality, which doomed them a decade ago.

If mortgages continue to be mostly vanilla, backed by concrete guidelines set in place by Fannie Mae, Freddie Mac, and Ginnie Mae (FHA/USDA/VA), they should flourish.

This is especially true if their wholesale lender partners continue to provide them with better technology, helpful tools, and perhaps most importantly, access to low wholesale interest rates.

But if lenders make the same mistakes they did a decade ago, bringing back questionable underwriting practices and high-risk loan types, it could be the broker that feels the brunt of it once again.

Fortunately, that doesn’t appear likely with the regulations in place these days, and with what seems like a more level playing field, today’s mortgage brokers are in a much better position to succeed long term.