When Do Mortgage Payments Start? It Depends When You Close

A little bit of mortgage Q&A: “When do mortgage payments start?”

New homeowners (and those refinancing a mortgage) often wonder when mortgage payments start, as there’s sometimes a considerable gap between loan closing and the due date of the first monthly payment.

For example, you may have been told by your real estate agent or mortgage broker that payments won’t start for 45 days or longer and express some intense optimism as a result.

But you might be skeptical as well, and for good reason. Why would it take so long to start paying your mortgage lender back? Let’s find out!

Mortgages Are Paid in Arrears 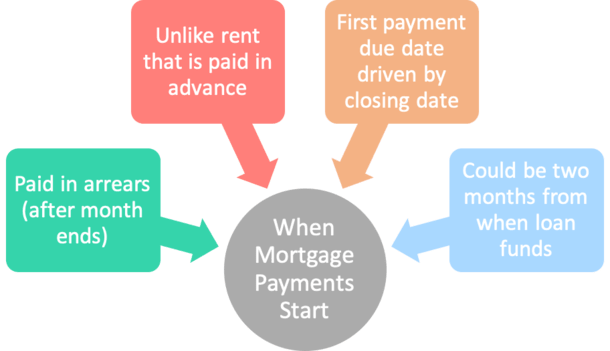 This loan was closed in early August, but the first payment isn’t due until October.

This phenomenon occurs because mortgages are paid in arrears, not in advance, meaning payment is made at the end of a certain period, such as one month.

Because interest is accrued on a mortgage balance each month, it cannot be paid until after the fact.

Simply put, your mortgage payment made on the first of the month will cover last month’s interest, along with taxes and insurance, and principal (if applicable).

This differs from monthly rental payments, which are paid in advance for the month they cover; if you rent a property, your payment due on say August 1st covers rent for the month of August.

You are paying the landlord ahead of time for the privilege to live in their property.

It makes sense if you think about it. With rent there isn’t a loan involved, and thus no interest. So it doesn’t need to accrue first before it is paid.

You just make your payment and get to stay in the property for the month.

With a home loan, it’s the opposite, which explains the time lag you might experience after first taking out a mortgage.

It’s gets tricky when you start making mortgage payments, as the start date of your first payment is determined by your closing date.

Example: If you close your mortgage on August 20th, your first mortgage payment isn’t due until October 1st.

However, at closing, you would need to pay the remaining interest for the month of August, or 11 days worth; this is typically known as prepaid interest, and appears as a closing cost.

Some borrowers think they’re skipping a monthly mortgage payment, but in fact they’ve paid the 10 days of interest in August and the full month of September by the time the October payment is due.

You can, however, avoid costly out-of-pocket upfront expenses by closing at the end of the month.

Doing so cuts down on the amount of prepaid interest that is due initially, but it doesn’t make a difference long-term. And your first mortgage payment will be due sooner.

If you close early in the month, you’ll pay many more days of prepaid interest at closing but your first mortgage payment won’t be due for about two months, as our scenario above illustrates.

For example, if you close on the 7th of August, you’ll pay about three weeks of interest at closing, but you’ll have nearly two months to make your very first mortgage payment.

In fact, because lenders typically provide a grace period to pay up until the 15th of the month, you could actually have more than two full months before the first payment is due.

What If You Close Super Early in the Month?

However, if you close very early in the month, say on the 1st, 2nd, or 3rd, there might be an option to receive a credit from the lender for those few days of prepaid interest.

Then you’d make your first payment the very next month for the full amount of interest due.

This way you can start tackling your mortgage if your goal is to pay it off sooner rather than later. And you can keep closing costs down if money is tight, or if cash to close is an issue.

But don’t forget about other prepaid items, like homeowners insurance, property taxes, and HOA dues, for which reserves may also increase if your loan closing date falls into the next month.

There is an advantage to closing early in the month though; mortgage lenders are typically a lot less busy.

This has to do with a company’s monthly funding goals and getting those loans closed by month’s end for the borrower’s sake.

And really, you should have enough money set aside for closing costs regardless of when your home loan funds.

5 thoughts on “When Do Mortgage Payments Start? It Depends When You Close”