Allow me to get testy about grammar for a minute (moment). I know I know, it’s lame to be a member of the grammar police and go after folks for using a word incorrectly.

I’m sure I use words incorrectly all the time.

In fact, maybe I should have used a synonym of incorrectly that second time around to mix things up.

But in this particular case, we’re talking about two completely different words that sound exactly the same but have entirely different meanings.

And they often get confused in the mortgage world, with the word “principle” typically used in place of the correct “principal.”

The scary part is that mortgage professionals and high-ranking journalists make this mistake all the time. Perhaps that’s why I have a bone to pick.

What Is Mortgage Principal? 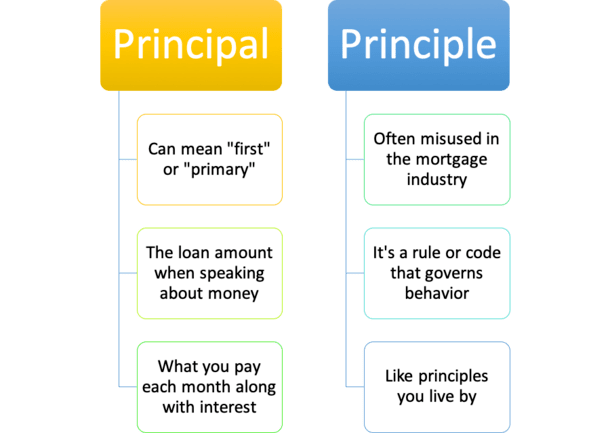 Well, the word principal generally means “first.” That’s why the head of a school is known as the principal, because they’re basically the one in charge (just watch out for the superintendent!).

When it comes to money, the word principal takes on a different meaning; the original amount invested or loaned.

So in the case of a mortgage, the principal balance would be the loan amount, which declines over time as it is paid off.

And each month you would make a payment with some portion going toward the principal and some going toward interest.

Assuming you’ve got an impound account, the payment would be split four ways with money also going toward taxes and homeowners insurance (there’s also PMI in some cases).

Now if the interest rate on our hypothetical, let’s say 30-year fixed mortgage, were 4%, the first payment would be $954.83.

Each month, the principal balance of the mortgage would fall, assuming fully-amortized payments, and not interest-only payments, were made.

For those who want to get a head start on paying down their mortgage, you can make an extra payment to principal, which means the excess amount goes toward principal once the interest is covered for the month.

So you can pay an extra $100 or $500 or round up your payment. Often you’ll need to tell the lender or loan servicer that you want the additional amount over your payment due to go toward principal so they know where to apply it.

The amount of equity you have in your home is the difference between your remaining principal balance and your current appraised value.

As a Matter of Principle

What about the word “principle?” Well, for starters it’s always a noun, whereas principal can be both a noun or an adjective (principal vs. principal balance).

It can mean a variety of different things, but perhaps the best definition is a rule (or code) that governs one’s behavior.

For example, someone might do something out of principle because it aligns with their moral beliefs. A vegetarian may not eat meat as a matter of principle.

Or someone may not do business with a large corporate bank out of principle because they disagree with their lending practices.

I suppose someone could decide not to pay their mortgage out of principle, or do something else money-related based on their principles, but that might be a stretch.

In the end, if you’re talking about your home loan, the word “principal” is likely the version of these very similar words you’re looking for.

Of course, in principle it may not matter, the bank will probably send your money to the right place even if you write “principle” on the check.