As mortgage rates continue their ascent toward 6%, more and more folks are talking housing market crash.

Emphasis on “real,” as in inflation-adjusted. Everything has gone up in price, and wages should also be rising.

This means a higher mortgage rate isn’t even a roadblock, or really as bad as it seems.

And because rates remain historically low, once you factor inflation, they could still be seen as a screaming deal.

I’ve said it countless times, and I’ll repeat it again. Higher mortgage rates don’t automatically lower home prices. Or lower them at all.

If one goes up, the other doesn’t go down. And vice versa. It’s possible both can move in tandem, or opposite one another, based on many other factors.

So those who have been watching 30-year fixed mortgage rates absolutely surge from below 3% to nearly 6% must be beside themselves.

How could home prices not fall, or at the very least, not continue to rise? This makes no sense.

Why would home buyers continue to pay such outrageous prices now that interest rates aren’t at record lows?

Part of the answer is they want/need shelter, so they’re willing to pay “top dollar” for it.

Another reason is it’s still not that expensive once you factor in inflation and growing wages for these home buyers.

The other key factor continues to be a supply/demand imbalance, with way too little inventory available to satisfy demand.

Oh, and there are lots of buyers paying all-cash for their home purchase, which has nothing to do with mortgage rates.

All of these things have kept the housing market humming through spring, seemingly defying the expectations of housing bears and naysayers.

There’s a saying that history doesn’t repeat itself, but it rhymes. The origins of that quote or similar are hard to determine.

But the general idea is that we use the past to predict what will happen in the future. And we use a similar event for direction.

When it comes to the housing market, anyone who is skeptical of right now is looking back to the Great Recession.

Specifically, the housing market from around 2006 to 2008. Unfortunately, that’s a very extreme comparison, hence its name.

These were both severe economic downturns, and as such, were spaced well apart from one another.

This means the chance of another event of that magnitude anytime soon is pretty low.

Still, we’ve enjoyed many fruitful years lately, so a recession or downturn of some kind is certainly in the cards.

The question is how bad will it be this time around? 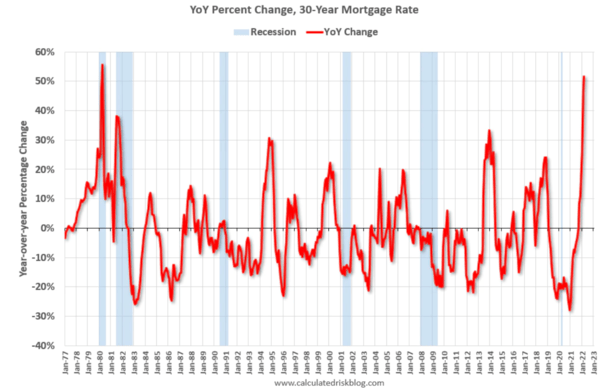 Instead of comparing today’s housing market to the one that preceded the Great Recession, we might want to look back a bit further.

The housing market in 2006 was fueled by an abundance of stated income and no-doc adjustable-rate mortgages, tons of cash out mortgages, and zero down mortgages.

None of that is present today, though relatively harmless hybrid ARMs like the 5/1 ARM are beginning to make more of an appearance.

Now if we go back a lot further in history, we might find a better example for our history “rhyme.”

I’m talking about the late 1970s and early 1980s, when inflation was super high and mortgage rates spiked.

The old timers love talking about how high mortgage rates were back then. They scoff at your 6% mortgage rate today.

Just a few years earlier, it was as low as 9.01%, so mortgage rates literally doubled. And did so at very high levels.

While our mortgage rates are still ridiculously low by comparison, they’ve nearly doubled as well in just a matter of months.

Additionally, demographics are very favorable for home buying, with 45 million Americans hitting the first-time home buyer age of 34 between 2017 and 2027.

This is similar to what was happening back then, as Bill McBride of Calculated Risk points out.

As you can see from his chart above, there’s been a very similar year-over-year change in mortgage rates on a percentage change basis.

The one big difference between then and now might be inventory. I say might because he doesn’t have the data, nor do I.

But we know housing inventory is at record lows today, so chances are today’s housing market is even more insulated than the late 70s/early 80s market.

So what will happen to home prices? Will we finally get our big, overdue crash? 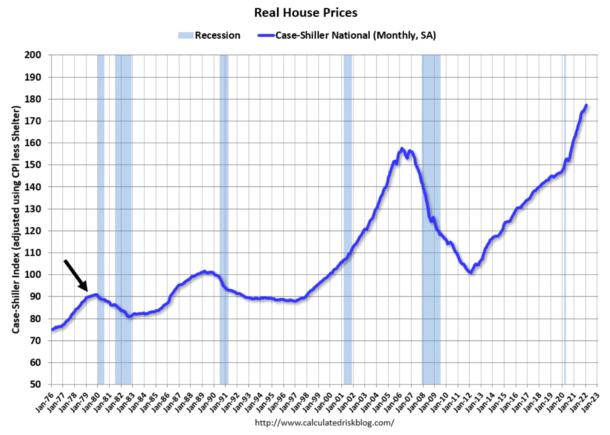 Okay, so it might be better to compare today’s housing market with the one seen in the late 70s/early 80s.

That makes sense given the inflation and interest rate environment, though remember history doesn’t repeat itself, it merely rhymes.

This provides us with clues as to what happens next, but nothing definitive.

McBride’s take, based on analyzing that time period, calls for a decline in both housing starts and new home sales.

We may also see an increase in housing inventory, though as mentioned, it’s currently at record low levels.

Here’s the kicker – nominal home prices might not even go down during the next “housing bust.”

That’s pretty wild when you look at how much home prices have already risen.

However, real home prices (those adjusted for inflation) may decline, as they did from 1979 (when they peaked) until 1982.

Back then, they fell 11% in real terms, but nominal prices “increased slightly” due to inflation.

In other words, you may want to temper your expectations with regard to a massive housing market crash.

Yes, home prices are “crazy high,” but so is the price of everything else.

And millions of Americans are enjoying very low, fixed housing payments that are only getting cheaper as prices and interest rates rise.

So a flood of distressed sales and foreclosures likely isn’t in the cards as it was a decade ago.

For those of you waiting on the sidelines looking for a fire sale, it may not happen.

And those who simply want to buy a home may also not see any major relief.

This isn’t to say you should panic-buy a house, but waiting for some big price cut might not be a great strategy either.

previousAre Mortgage Rates Heading to 6%?
nextTop FHA Lenders: Pennymac Is #1 Overall, But Is Biggest the Best?