Yes, You Can Buy a Home on a Minimum Wage Salary, Maybe

A new analysis from Zillow revealed that many minimum wage earners own homes nationwide, a surprising fact given how low the hourly rate of pay appears to be.

The company noted that 3.3 million Americans were paid at or below the federal minimum wage of $7.25 an hour last year.

Yet almost two-thirds of suburban minimum wage earners (and nearly half of those in urban areas) resided in their own property.

Per the analysis, minimum wage earners generally work 40 hours per week, 52 weeks a year. And about two-thirds reside in dual-earning households.

Interestingly, owners dedicated less of their income to mortgage payments, as seen in the table below.

For single and dual-earning families, the median share of income allocated to the mortgage payment was just 33% and 20%, respectively.

That compares to 45% for single-earners and 25% for dual-earners when renting a property.

Of course, there are a lot of hidden costs to owning as opposed to renting, including necessary repairs and upkeep.

Where Can Minimum Wage Earners Actually Buy a Home? 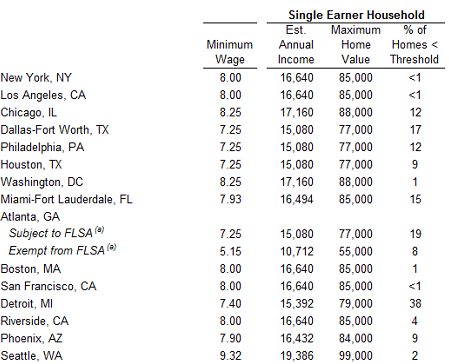 Okay, so we know minimum wage earners still own homes, even those who get no help from a spouse or partner. But where are they actually buying these properties?

Well, as you might have guessed, most of the affordable properties are located outside of major metropolitan areas, though there are a few exceptions.

Zillow made some assumptions about affordability for minimum wage earners to determine where they could buy homes nationwide.

They calculated the maximum affordable home value for single- and dual-earner families in the 35 largest metros by assuming the borrower would have to take out a 30-year fixed FHA mortgage.

And that the interest rate would be roughly 5.3% thanks to a lower credit score between 640 and 679.

Finally, they took those numbers and applied them to the median bottom-tier home (the bottom third of the housing stock) in a given metro area to determine availability.

What they found was that there were very few affordable homes available to minimum wage earners in major cities like New York, Los Angeles, DC, Boston, San Francisco, San Diego, Minneapolis-St. Paul, Portland, and so on.

In fact, the maximum home value available to these workers in NY and LA is just $85,000. Good luck finding a property under $100k in either location, or even close to it.

In all of these metros, one percent of fewer homes are considered affordable to single-earning minimum wage households.

The numbers weren’t much higher for dual-earning minimum wage households either. Still less than one percent of properties were deemed affordable in many locations.

On the other hand, single-earning minimum wage households could afford 38% of properties in Detroit. And 32% in Cleveland, 29% in Tampa, 27% in Pittsburgh, and 23% in St. Louis.

But Zillow noted that many minimum wage workers tend to stay in the urban areas and rent, or move to areas where prices are a lot lower and commute across metro areas, like from Riverside to LA County.

In other words, homeownership is still out of reach for many.

3 thoughts on “Yes, You Can Buy a Home on a Minimum Wage Salary, Maybe”

previousHome Prices Are Expected to Peak in 2016, Then Do Pretty Much Nothing Through 2022
nextZillow to Buy Trulia for $3.5 Billion in Stock