Watch Out for 8% Mortgage Rates

Now that interest rates have resumed their upward climb, do we have to worry about 8% mortgage rates next?

Back in July, I questioned if 7% mortgage rates were on the horizon, given the steady rise seen at that time.

While rates hadn’t officially hit 6% then, by Freddie Mac’s measure at least, they were in that range and seemingly heading higher.

But shortly after they got a much-needed reprieve and began drifting back to the lower 5s and even the high 4% range.

What Are Mortgage Rates Currently? It Depends Who You Ask

They run the most highly cited mortgage rate survey in the nation, and thus are seen as the official scorekeeper.

According to Freddie, the 30-year fixed averaged 6.02% last week, the first time it crossed the 6% threshold since late 2008.

Of course, we know the 30-year fixed was in the 6% range at times during early summer, even if it wasn’t reflected in the survey.

Regardless, mortgage rates have surged even higher since last week, and the Freddie survey will likely show a big jump, potentially something close to 6.25% or higher.

Here’s the thing though. These average rates are for prime borrowers (excellent credit) who are buying (purchase loans) a single-family residence.

If we consider a home buyer with a 3-5% down payment and a 660 FICO score, who doesn’t want to pay points at closing, their rate could well surpass 7%.

Basically anything higher risk than the vanilla scenario thrown out by Freddie will see higher rates than the survey average.

In other words, before you think an 8% 30-year fixed is crazy, consider where mortgage rates really reside at the moment. 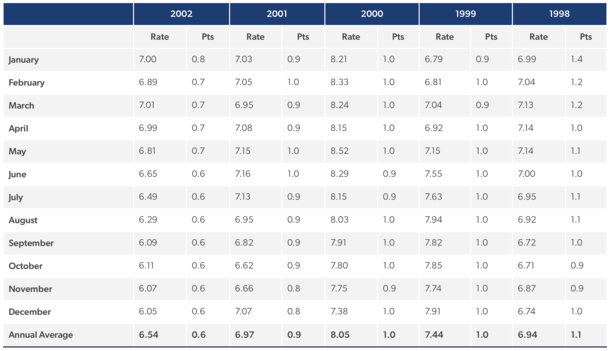 Of course, we all know they marched lower for about two decades after that, reaching record low after record low.

Per Freddie, the 30-year fixed last surpassed 8% during August 2000. So we’d be looking at a full 22 years if rates were to go there again.

But as mentioned, some borrowers might already be receiving mortgage rate quotes in the 7% range.

So whether official or not, if mortgage rates stay on their upward trajectory, it’s possible consumers could begin seeing 8% mortgage rates at some point this year or next.

Of course, that’s if we continue on that path. When I wrote about the possibility of 7% mortgage rates back in July, they promptly did an about face.

No One Really Knows How High Mortgage Rates Will Go

Ultimately, we’re all just speculating and playing the guessing game. No one knows how high mortgage rates will go.

To my knowledge, nobody knew the 30-year fixed would even touch 5% this year, seeing that it started the year at 3.22%.

Most of the 2022 mortgage rate predictions called for rates in the 3-4% range, with most not even exceeding 3.7% (including my own!).

At the same time, Fannie Mae’s recently released August Housing Forecast included a 2023 estimate for the 30-year fixed at 4.5%.

So it’s hard to know what’s really going on. Ultimately, these are unprecedented times, and until inflation is under control, we’ll likely see higher highs.

How high remains to be seen, but if inflation continues to run hot, the pain will continue.

Whether that translates to an 8% 30-year fixed is another question. But at this point, it’s certainly not out of the question.