Are We on the Verge of a Housing Boom or Bust?

Is real estate set to boom or is another bust imminent just a decade after the last housing crisis?

There’s been a lot of chatter on both sides of the argument lately, so which one is it?

We Should Be Booming, But We Aren’t?

A recent article from Axios notes that we should be experiencing a boom, what with the ultra-low mortgage rates, limited inventory of homes on the market, and accelerating wage growth.

But instead, the real estate market has been “stagnant” for the past three years and even turning lower in some markets nationwide.

UBS Global Wealth Management real estate analyst Maciej Skoczek told Axios that on average, home price appreciation is “close to an end,” and those buying a city apartment should “adjust to a lengthy lean period.”

He even went as far as to say “the end of the boom” is here and that the “world is changing,” apparently a viewpoint that younger generations have no interest in a mortgage and owning a home.

That’s a pretty bold statement, to basically give up on real estate, which has been the cornerstone of the American Dream for decades. And the biggest creator of wealth for American families.

As such, I’m not buying it. It smells of fearmongering, and is akin to selling your stock portfolio because of a bad week or month on Wall St.

Ultimately, we all need shelter, and a home is great provider of it. Real estate also happens to hedge inflation and generate wealth via forced savings, something most American can’t do on their own. 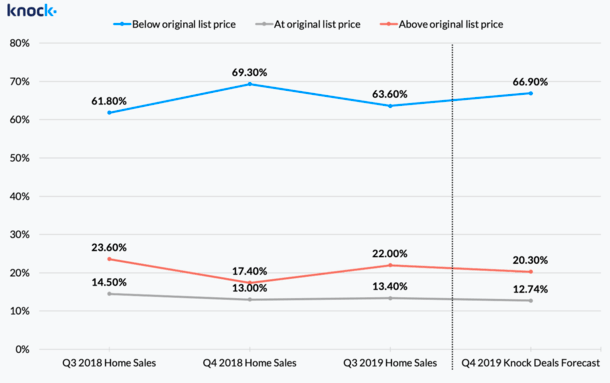 Then we have a report from iBuyer Knock, which claims 67% of on-market listings are predicted to sell below their original list prices in the fourth quarter of 2019.

That’s up from the 63.6% of homes sold at a discount in the third quarter, which the company believes is a reflection of seasonality.

They also note that the slower quarterly rate of change in “Deals,” which are homes that sell at a discount relative to their original list prices, lends itself to a more balanced market

Knock cautions that this doesn’t necessarily mean competition is rising, it’s more “a balancing of the market as sellers become more realistic about the market value of their homes.”

I couldn’t agree more, and believe this is a more accurate interpretation of what’s been going on over the past year or so.

Sellers’ expectations have been so out of whack lately that a home sold at or below list is now seen as a failure.

But if you consider the prior sales price, in most cases these homes are still fetching quite the premium thanks to the stellar appreciation realized since the housing bottom.

One also has to consider the quality of the homes on the market in what could be argued as the later innings of the housing recovery.

It’s no secret that a lot of fixer uppers have made their way to market as older generations finally make the decision to up and leave.

Simply put, you can’t throw just anything on the market these days and expect it to sell for $100,000 over asking.

Today’s buyer is a little more discerning, partially because they don’t have the money you’re asking for. But that doesn’t mean they aren’t interested.

A Wave of New Home Buyers Is Coming 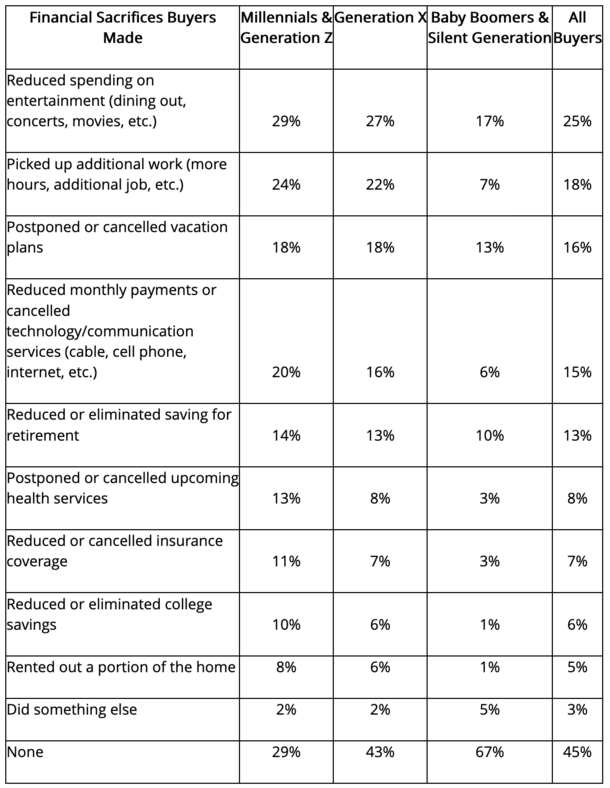 I wrote a while back that the median age of a first-time home buyer is 34 years old.

Over the next decade, 45 million Americans will reach this important age.

This supports a recent argument by Stephen McBride, editor of RiskHedge Report, and Barry Habib, founder of MBS Highway.

In short, they believe the home buyers are going to come in droves, and because supply is so low, it will force home builders into action.

A recent report from Zillow revealed that for-sale inventory continued its decline in September, with 102,112 fewer homes on the market nationwide than there were a year earlier.

That points to appreciating home prices as buyers flood the market and snap up what little is out there.

This might be even more pronounced due to higher building costs and a lack of quality labor in the construction sector.

The counterargument here is that these Millennials and Gen-Z prospects are riddled with student loan debt, and thus cannot afford to buy a home even if they want to.

But we know when there’s a will, there’s a way. And that could mean more creative financing products to help those with student loans get a mortgage.

It could also usher in another era of higher-risk home loans, which usually precedes a fall or a bust.

A different Zillow survey found that younger buyers are making tradeoffs to buy homes, even postponing healthcare services or cancelling their insurance. So apparently, the desire to own a home remains strong.

And if you consider the stages of a housing recovery, we’ve yet to enter the phase where construction spins out of control.

Back in 2006 and 2007, there were entire developments of homes just sitting, vacant and/or unfinished. Today, that’s not the reality, not even close.

It’s not to say we don’t get there eventually, it just feels a long way out. Granted, long could be five years, but five months seems a stretch.

If you believe in cyclical markets and trends, there’s a chart that basically says 2024 could be the year things turn for the worse. Or perhaps peak and begin to fall.

That gives us many more years of home price appreciation in the current cycle, and it kind of makes sense given the many coming-of-age home buyers, the low mortgage rates, and the major lack of inventory.