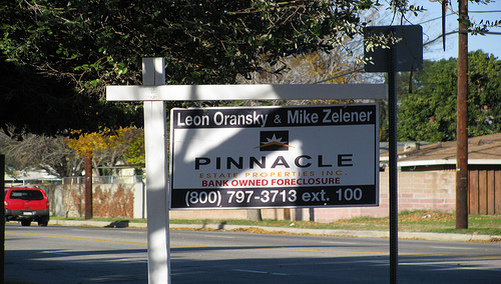 Notice of defaults, the first step in the foreclosure process, increased to a record high 54,268 filings last month in California, according to ForeclosureRadar.

Filings were up 29.3 percent over February, 26.3 percent compared to the same period last year, and 25.8 percent above previous peak levels seen in April 2008.

Notices of trustee sales, when a property is set to be auctioned, increased 82.3 percent from February and 19.6 percent from the same period a year ago,  but still sat below record highs seen in July 2008.

Meanwhile, auction sales decreased 41.4 percent from February, with just 10,040 properties sold in March, a 36.6 percent decrease from a year ago.

That’s even with mortgage lender discounts at auction increasing to an average 44.1 percent, which makes you wonder if it’s really a buyer’s market…

ForeclosureRadar president Sean O’Toole noted that there has been a large lag between foreclosure filings and foreclosure sales, perpetuated by government meddling.

California Senate Bill 1137, which requires lenders to attempt to contact homeowners before filing a NOD, resulted in a temporary drop in foreclosure filings last September, but only seemed to delay a growing problem.

“Not one government program aimed at addressing the foreclosure problem has dealt with the core issue of negative equity — and there can be no doubt these programs are having dramatic impacts on the foreclosure process”, said O’Toole.

“Unfortunately, the only tangible effect of these programs so far is a significant increase in uncertainty for homeowners, lenders, investors and even government officials trying to make sense of these wild swings in activity,” he added.