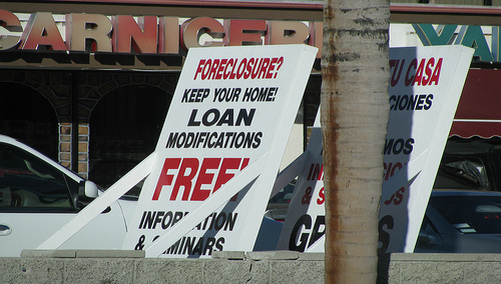 Since the mortgage mess got in full swing, mortgage lenders and loan servicers have been increasingly offering mortgage modifications to stave off foreclosure, but the results haven’t been too hot.

This begs the question as to whether these loss mitigation tools actually work, especially if the homeowners are so underwater that it will take them literally decades to get back above water.

What we know so far is that the re-default rate on loan modifications has been so high that many question if they even work, and if they’re worth all the legwork/trouble, not to mention the money involved.

Back in May, Fitch Ratings warned that 3 out of 4 mortgage modifications may re-default after just 12 months, a staggeringly high failure rate for what were regarded as potentially home-saving loss mitigation tools.

Of course, there may be a reason all these loan modifications are turning out nasty numbers; they don’t actually lower monthly mortgage payments.

Are These Really Loan Modifications? Or Just Repayment Plans?

That’s right, many of these loan modifications actually result in payments that are unchanged or higher than they were before, thanks to past due amounts being piled on top of the existing balance.

These types of loan modifications, if you can even call them that, are really just simple repayment plans that get borrowers current but fail to address affordability concerns.

Clearly that’s no way to help a struggling homeowner get back on track, unless by chance they had a brief loss of income that has since been restored.

So what’s the answer?  How do we make more mortgage modifications work?

If It Doesn’t Lower the Payment…

Well, it’s not as hard as it may seem; apparently a combination of lower monthly payments, along with principal forbearance or forgiveness will get the ball rolling and make for more sustainable payments moving forward.

After all, if a homeowner can’t make their $2,000 a month housing payment, why should we expect them to make a $2,500 payment? That makes absolutely zero sense.

Taking the time to determine what borrowers can actually afford via proper income documentation and other sound underwriting measures will likely lead to a better loan modification success rate.

If banks and loan servicers don’t actually assess the situation properly, it’s a big waste of time and money, and just delays the inevitable.

Unfortunately, more stringent underwriting tied to loan mods may also reveal that foreclosure is simply the only answer for many, especially those who are in no shape to make reduced payments on a severely underwater home.

But we should still explore what works because there are probably millions across the nation who could benefit here, and that will help the real estate market as a whole.