In the analysis posted on Fannie’s website, Palim notes that the recent increase in mortgage rates shouldn’t derail the nascent, yet rather fragile housing recovery.

But surely one would logically assume that a larger monthly mortgage payment would mean home prices would have to come down, right? Not exactly. 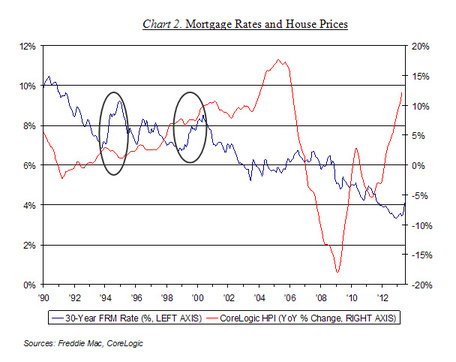 He points to history, which shows no strong correlation between rising interest rates and slumping home prices. And he uses charts to state his case.

For the record, that’s a 34.7% increase. Still, home prices weren’t really affected, as you can see from the chart above. As Palim pointed out, appreciation slowed, but year-over-year prices were still higher.

That’s a 26.8 increase, in case you’re wondering. During that time, home prices didn’t seem to lose any momentum, and actually appeared to keep increasing at a reasonable pace.

While those examples are perhaps telling of what may happen as rates continue to rise, Palim himself did admit that the recent toying with rates (via quantitative easing) has no “historical precedent.”

In other words, we are in uncharted territory, despite leaning on the old maxim that higher mortgage rates don’t lead to lower home prices.

That said, let’s take a closer look at what’s happened over the past month and change. During the week ending May 2, 30-year fixed mortgage rates averaged 3.35%, not far off their record low, per Freddie Mac data.

This week, the 30-year fixed averaged 4.37%, which is a 30.4% increase. So in just over a month, mortgage rates nearly matched the worst run-up seen since 1990. And that rate spike took over a year to materialize.

So we are indeed in unprecedented times, and it’s not totally possible to predict the future, seeing that we don’t have anything to go on here.

It should also be noted that home prices have shot up in recent months as well, so affordability has really taken a hit (See the NAR chart for more on that).

[Check out my mortgage payment graphs to see how much the higher rates will cost you.] 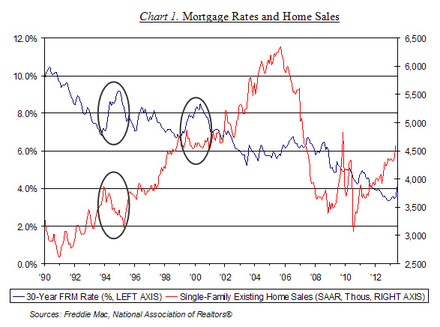 What we do know is that this substantial rate increase of late should have more of an effect on home sales, which historically slow when rates increase.

As you can see from the chart above, when rates spiked, home sales seemed to take a dive on both occasions, though they did march ever higher, largely because mortgage rates continued to ease over time.

So the big question is how much more will mortgage rates rise, and if they continue on their upward trajectory, will home sales come to a crawl again? Or worse, will home values begin to stagnate and fall?

This is a serious concern at the moment, seeing that many homeowners remain underwater, and are probably only making mortgage payments with the expectation they’ll soon have some positive amount of home equity.

If that scenario doesn’t materialize, the housing market could go bust again, and that would really rattle the nerves of Americans nationwide. Sadly, most still aren’t even convinced we’re on the path to recovery.

In fact, a poll from Yahoo! Finance this morning asked readers if they were bullish on housing. The top answer was, “I think real estate is on shaky ground.”

Put simply, consumer confidence is still not even close to where it should be if we’re truly experiencing a solid recovery.

One thing is for sure though – as rates rise and affordability decreases, homeowners will increasingly turn to adjustable-rate mortgages to finance their purchases. History is pretty clear on that trend.

Read more: Watch out for the adjustable-rate mortgage pitch.

previousChart: Housing Affordability Set to Fall Off a Cliff
nextMortgage Jobs on the Line as Rates Rise