Chart: Look How Many Homeowners Could Benefit From HARP 3.0

I’ve discussed the idea of an enhanced Home Affordable Refinance Program (HARP) on several occasions, though nothing has actually materialized.

Whether it’s HARP 3.0, #MyRefi, or reHARPing, there’s no argument that the guidelines could be eased quite a bit to allow many more to refinance under the program.

But just how many homeowners could actually benefit if the rules were changed again? Well, a pair of Fed researchers did the heavy lifting for us, and now we have a decent idea under a variety of different scenarios.

2.5 Million Have Already Benefited Under HARP 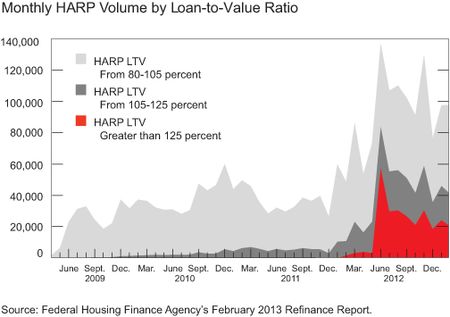 More importantly, these homeowners were given major motivation to stay in their homes, as opposed to walking away with little or no equity to keep them interested.

In 2012, the program got a name change (HARP 2.0) and a major tune-up, allowing homeowners to refinance without any loan-to-value constraints (previously 125% LTV).

As you can see from this chart, that put the program into overdrive and greatly increased homeowner participation.

Mortgage rates happened to be pretty low at the time as well, which probably made HARP a lot more popular than it otherwise would have been.

Still, it’s clear that program enhancements led to a lot more interest in the program, and that meant fewer mortgage defaults, increased consumer consumption, and an improved economy.

So why won’t policymakers consider the proposed changes for HARP, which include a later cutoff date and/or the possibility of reHARPing? 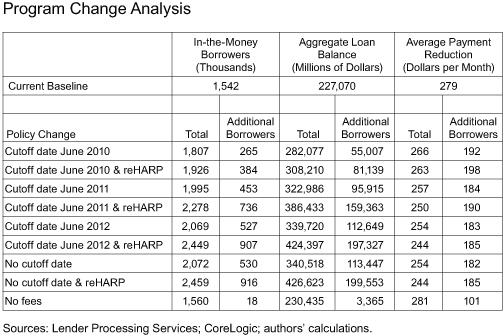 Per the Fed researchers, Joshua Abel and Joseph Tracy, about 1.5 million homeowners are “in-the-money” to benefit from HARP as it currently stands.

By in-the-money, they mean the lower payments afforded via HARP would be recouped in three years or less, making the refinance worthwhile.

However, these borrowers haven’t taken advantage for one reason or another, including the possibility that they might be moving soon, or due to a “lack of financial sophistication” or knowledge of the program.

At the moment, HARP is only available to those who obtained a mortgage before June 1, 2009. If the program cutoff date was shifted a year, to say 2010, another 265,000 borrowers would be eligible.

Well, it’s pretty darn significant as well. If borrowers were allowed to reHARP, so to speak, another 400,000 or so would benefit under their definition.

So both the cutoff date and the ability to HARP again are game changers. The researchers also looked at waiving fees, but found it would have a minimal effect, with just 18,000 additional borrowers added to the eligibility pool.

Unfortunately, it’s doubtful that any of these changes will actually see the light of day, now that it’s 2013 and the housing recovery is supposedly in full swing.

Additionally, mortgage rates have skyrocketed recently, so I’m curious if these numbers are still actually accurate.

Finally, seeing that 1.5 million eligible homeowners chose not to take part, it’d be tough to convince lawmakers to expand the program even more.

For the record, private-label mortgages are the probably the most in need of a HARP-like refinance, yet efforts to expand HARP to those types of mortgages has repeatedly fallen on deaf ears.

Update: The authors of the study were kind enough to provide an updated table, based on the recent rise in mortgage rates. Take a look at how things would play out assuming rates on the 30-year fixed remain closer to 4.5%, as opposed to the 4% used for the original analysis. It pretty much cuts the eligible number of borrowers who would benefit from HARP 3.0 in half. 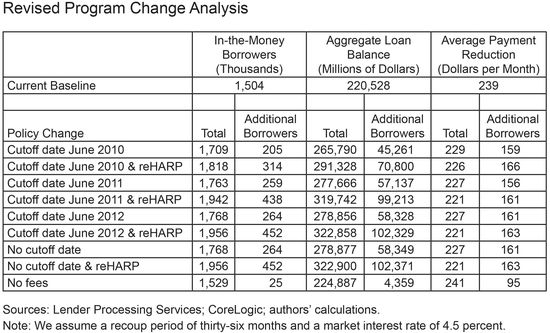 3 thoughts on “Chart: Look How Many Homeowners Could Benefit From HARP 3.0”

previousDon’t Choose a Mortgage Lender for Their Sales Gimmick
nextChart: Housing Affordability Set to Fall Off a Cliff