Foreclosure Ban in the Works? 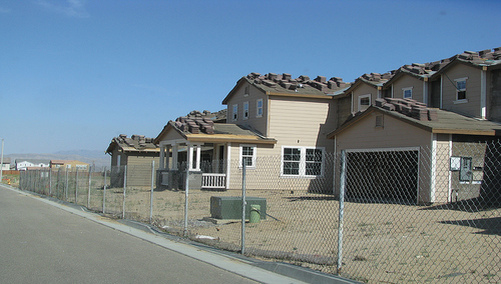 Alarm bells sounded yesterday after it was relieved that the Obama Administration was considering an all-out “foreclosure ban.”

But it’s probably a big ado over nothing…essentially all foreclosures would be banned until the associated mortgages were reviewed for possible inclusion in the Home Affordable Modification Program (HAMP).

Currently, mortgage lenders and servicers can initiate foreclosure proceedings on any loan that hasn’t been submitted for HAMP eligibility, and foreclosure litigation can proceed even while borrowers are in trial loan modifications.

A document detailing the proposal obtained by Bloomberg said it “prohibits referral to foreclosure until borrower is evaluated and found ineligible for HAMP or reasonable contact efforts have failed.”

But it’s not a done deal, as Treasury spokeswoman Meg Reilly pointed out in an e-mail, claiming it was one of many ideas floating around and not yet approved.

Even if it were approved, would it really cause much of a stir or just delay things further? That’s debatable, but to me it seems it would just require lenders and servicers to take an additional step before initiating the inevitable.

Clearly a large number of loans are not eligible for HAMP.

Of the roughly 5.6 million homeowners that are 60-days or more delinquent, about 1.7 million are eligible for HAMP, so there would be plenty of easy outs.

Possible exclusions range from the home being vacant or non-owner occupied, the debt-to-income ratio falling below 31 percent, or the loan amount exceeding the conforming limit (jumbo mortgages).

Additionally, 1.3 million homeowners have already received offers for trial loan modifications under the program, so it seems the proposal would do too little, too late.

But hey, if they don’t stop to consider you for HAMP inclusion, you can always bulldoze your house.