Foreclosures Dip in November, Up 68 Percent from Year Ago

Mortgage research firm RealtyTrac said today that the number of foreclosure filings declined last month because of an expected respite in interest rate resets, but warned that the number will likely rise higher next year.

Interest rates reset higher on more than $87 billion worth of subprime mortgages in the third quarter, and another $84 billion are expected to reset in the fourth quarter, according to analysts for Credit Suisse Group.

“We’ll see another fairly big spike in filings in early ’08,” Sharga said. “Then there’s another group of loans that’s due to reset in May and June, so we’ll see another wave of defaults probably in the fall.”

In all, 43 states saw an increase in foreclosure filings over the last year, with California, Florida and Ohio reporting the most filings and Nevada holding the highest foreclosure rate.

California had 39,992 filings in November, more than double its total from a year earlier, but 21 percent fewer than in October.

Florida reported 29,238 filings, more than triple the number a year ago, but down 3 percent from a month earlier.

Ohio’s 16,308 filings were nearly double the number from a year ago, but down 5.6 percent from October.

Keep in mind that filings include default notices, auction sale notices and bank repossessions, and some properties may receive more than one notice if the owner has multiple mortgages (second mortgages), though not all default notices end in foreclosure.

Below is the latest foreclosure heat map based on November 2007 data, released by RealtyTrac. 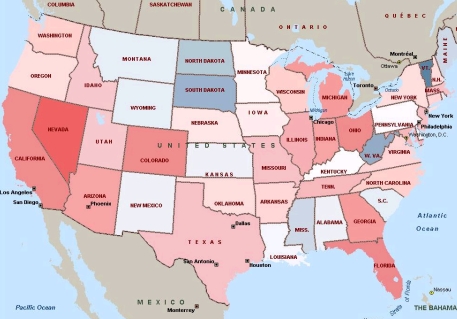