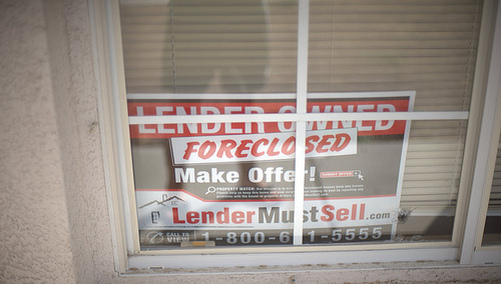 Good news folks: Foreclosure activity fell two percent last month compared with January, and was up only six percent compared with February 2009, according to RealtyTrac.

Default notices, scheduled foreclosure auctions and bank repossessions were reported on 308,524 properties during the month, representing one in every 418 U.S. housing units.

“This leveling of the foreclosure trend is not necessarily evidence that fewer homeowners are in distress and at risk for foreclosure, but rather that foreclosure prevention programs, legislation and other processing delays are in effect capping monthly foreclosure activity — albeit at a historically high level that will likely continue for an extended period.”

Oh, and severe weather may also have slowed the processing of foreclosures in the Northeast and Mid-Atlantic states…

Bank repossessions (REOs), or the actual loss of a home to foreclosure, were reported on a total of 78,683 U.S. properties during the month, down 10 percent from the previous month but up six percent from February 2009.

Six states, including California, Florida, Michigan, Illinois, Arizona, and Texas, accounted for more than 60 percent of the nation’s foreclosure activity.

Nevada continued to lead the nation in rate of foreclosure, with one in every 102 households receiving a foreclosure notice during the month, though activity was down seven percent from January and 30 percent from February 2009.