HELOC Rates Expected to Rise Another 2% By Early 2023

In recent months, home equity lending has picked up speed as interest rates on first mortgages have effectively doubled.

Long story short, it doesn’t make a lot of sense to apply for a cash out refinance only to lose your low fixed rate in the process.

But borrowers still want to take advantage of their piles and piles of home equity and get access to cash.

One potential pitfall at the moment is rising HELOC rates, which are slated to go up another 2.25% between now and 2023.

HELOC Rates Can Adjust Higher (or Lower) Over Time 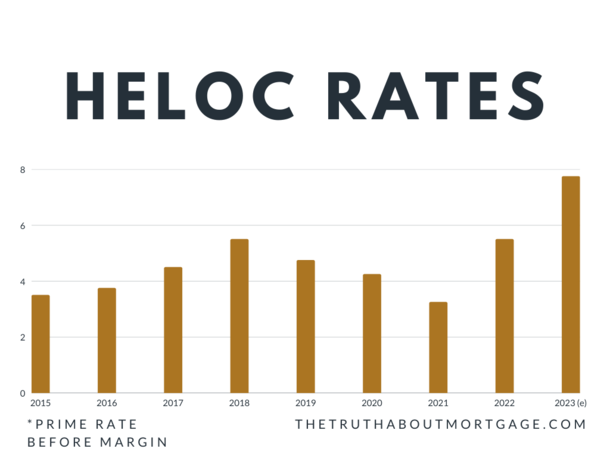 As noted, the economics of a cash out refinance are becoming less and less favorable as first mortgage rates rise.

At last glance, the 30-year fixed was averaging higher than 6%, and your actual rate would likely be even higher if you elected to take cash out.

This makes it a losing proposition for most, seeing that the average American homeowner has a fixed rate in the 2-3% range.

The alternative is a second mortgage that doesn’t disrupt the first mortgage, but still allows for equity extraction.

The two main options are a home equity loan or HELOC, the latter of which allows for draws only when needed.

You get the flexibility of borrowing only what you need, but the downside is an adjustable rate tied to the prime rate.

Now the additional bad news. It’s expected to keep rising, pushing HELOC rates up with it.

The latest estimate calls for a prime rate as high as 7.75% in early 2023, assuming the Fed continues to raise its target fed funds rate to a terminal rate of 4.75% by February.

Your HELOC Rate Depends on the Margin and Any Discounts

The chart above shows the movement of the prime rate, which is what all HELOCs are based on.

To come up with your actual HELOC rate, a margin is added. This is basically a markup above prime that the bank takes as a profit.

But these margins can vary widely from bank to bank, especially if you have relationship discounts as an existing customer.

For example, if you’re already a customer at the bank and use autopay, they may give you discounts of .50% to .75%.

That could push your HELOC rate down to close to prime, assuming you’ve also got excellent credit and a relatively low combined loan-to-value ratio (CLTV).

Similar to first mortgages, there can be pricing adjustments on HELOCs for things like FICO score, CLTV, property type, and so on.

If you’re a very low-risk borrower with an existing relationship you should qualify for the best HELOC rates, which could put your rate at or near prime.

HELOC Interest Rates Will Rise Another 2% Before Hopefully Falling Again

The reason is inflation, which continues to be a problem, as indicated by the most recent Consumer Price Index (CPI) report.

This means current HELOC holders will see their interest rates rise another 1%.

By February, HELOC rates are slated to go up another 1.25%, with prime hopefully topping out at 7.75%.

Still, that would mean our hypothetical HELOC holder would see their monthly payment rise to $1,180.05.

That’s an increase of $231.95 per month over the course of maybe half a year.

Now, the hope is that HELOC rates eventually fall again after the Fed is done tightening the screws. But nothing is certain.

In fact, it’s possible the Fed could raise rates even further than expected if inflation continues to run hot.

So when shopping for a HELOC, consider the fact that rates (and payments) will likely rise significantly over the next year.

This might sway your decision and push you toward a fixed-rate home equity loan instead. Or perhaps a HELOC with a fixed-rate option.

One nice thing about a HELOC is the fact that you don’t have to pull out the full amount of the line initially.

So you can open one and do the minimum draw if you think rates are going to be unfavorable for the foreseeable future.

Then you can access more cash later once HELOC rates settle down again.