Why Are Refinance Rates Higher? It All Has to Do With Risk

If you’ve been comparing mortgage rates lately in an effort to save some money on your home loan, you may have noticed that refinance rates are higher than purchase loan rates.

This seems to be the case for a lot of big banks out there, including Chase, Citi, and Wells Fargo, which while enormous institutions aren’t necessarily the leaders in the mortgage biz anymore.

In fact, today Quicken Loans is #1, followed by United Wholesale Mortgage in the #2 spot, then a mix of these big banks and nonbanks, including loanDepot, Caliber Home Loans, and others.

So why is that some of the big guys list “purchase rates” and “refinance rates” separately, with different pricing, points, and APRs?

Well, for starters a home purchase is not the same as a mortgage refinance, though both processes are very similar, and the underlying loans themselves aren’t much different.

Ultimately, a home purchase loan is for someone who has yet to buy a property, whereas a mortgage refinance is for an existing homeowner who wants to redo their home loan.

We know they are different objectives, but if the underlying loans are both 30-year fixed mortgages with the same loan amounts, the same borrower credit scores, and the same property types, why should rates be any different? 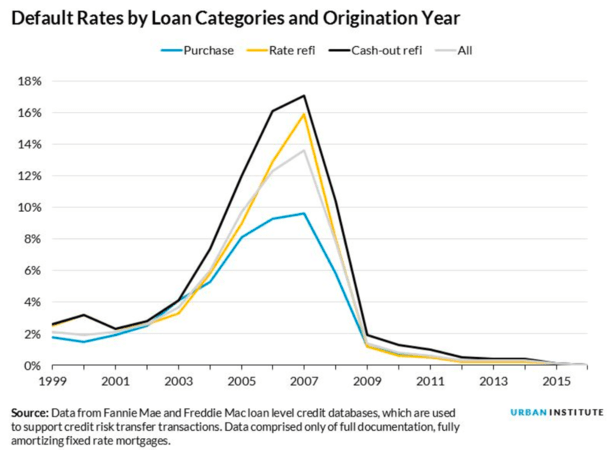 There are three main types of mortgages, including home purchase loans, rate and term refinances, and cash out refinances.

The first is self-explanatory and was already explained above, the second is simply redoing your current mortgage by obtaining a new interest rate and loan term, without changing the loan amount.

The third type results in a larger loan amount at closing because you’re pulling equity from your home, which a layman should assume would be the riskiest transaction.

After all, if a borrower now owes more debt, and maybe even has a higher monthly mortgage payment as a result, their default risk should rise.

Simply put, when you pull cash out of your home, you increase your outstanding loan balance, increase your loan-to-value ratio (LTV), and reduce your available home equity, that’s riskier.

This in theory should result in a higher mortgage rate to compensate for increased risk. And guess what – that is indeed the case. Cash out refinance rates are the highest, all else being equal, for basically all banks and lenders.

At least something makes sense around here…

A Rate and Term Refinance Sounds the Least Risky, Doesn’t It? 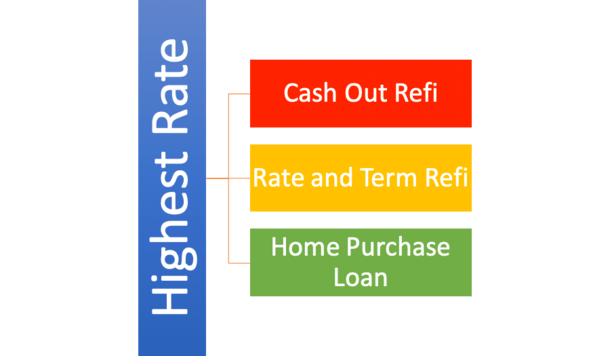 Now, a rate and term refinance should result in the least amount of default risk because the borrower is likely reducing their monthly payment in the process.

This happens via a lower interest rate and possibly a lower outstanding balance (paid down since origination) spread out over a brand-new loan term.

That leaves us with home purchase loans, which you’d think would be less risky than a cash out refinance, but not as risky as a rate and term refinance, since it’s ostensibly a first-time home buyer or someone in a new property.

If you were the bank, you’d probably want to give a new, cheaper loan to the seasoned homeowner who has been paying their mortgage for years as opposed to the first-time buyer or even a move-up buyer taking on more debt.

But for one reason or another, some banks and mortgage lenders offer the lowest mortgage rates on home purchase transactions.

The Lowest Mortgage Rates Are Offered on Home Purchase Loans

The reason boils down to DATA. Despite the fact that the actual loan characteristics (such as FICO score, LTV, and DTI) would indicate the lowest default rates on rate and term refinances, it is purchase loans that perform the best.

One possible reason why is because of faulty appraisals on refinances, which perhaps overvalue properties.

Regardless, purchase mortgages default the least, followed by rate and term refinances, and finally cash out refinances, the last of which actually makes sense.

Interestingly, the loan characteristics also indicate that cash out refis and purchase mortgages should default at about the same rate, yet they are priced the furthest apart.

And again, that’s because in real life, not expected default rates, purchase loans default the least and cash out refis default the most.

So when you compare mortgage lenders, you might often find that purchase rates are the cheapest, followed by rate and term refi rates, and finally cash out mortgage rates.

There’s no question cash out refinances cost the most – this is the norm amongst all banks and lenders to my knowledge.

But not all banks/lenders offer different rates for purchases and rate and term refis.

How Much More Expensive Are Refinance Rates?

I looked around and found that Chase, Citi, and Wells Fargo offer lower home purchase rates, while Quicken Loans offers the same exact rates for purchases and rate and term refis.

Quicken even says this in their fine print: “Based on the purchase/refinance of a primary residence with no cash out at closing.”

In other words, a purchase or rate and term refi are priced the same.

Clearly this matters when shopping around for a mortgage, so take notice of who is charging more/less for certain transaction types and choose accordingly.

One last thing – pay attention to the assumptions lenders make when they list their rates. It could also be that you’re not comparing apples to apples, if there are different loan amounts, LTVs, credit scores, mortgage points, and so on.

But know refinance rates are higher because they default more than purchase loans, and that requires a higher price to compensate for heightened risk, plain and simple.

2 thoughts on “Why Are Refinance Rates Higher? It All Has to Do With Risk”