How Low Will Mortgage Rates Go?

It seems that lately we reach a new all-time low for mortgage rates just about every week, which begs the question, how low can they go?

Indeed, mortgage rates have hit record lows eight times so far in 2020, and it is only mid-August.

If you had to bet, you’d probably guess that we’d see at least two more record lows this year, given the recent trend of lower and lower.

I assume that too would break some sort of record for most record lows in a calendar year, but that’s unclear.

What is clear is that we continue to see old records get broken with relative ease, and at this point even lower rates feel like a given.

The 2020 mortgage rate predictions are now totally laughable, with a 30-year fixed around 3.75% the most common response.

Can Mortgage Rates Get Even Better from Here? 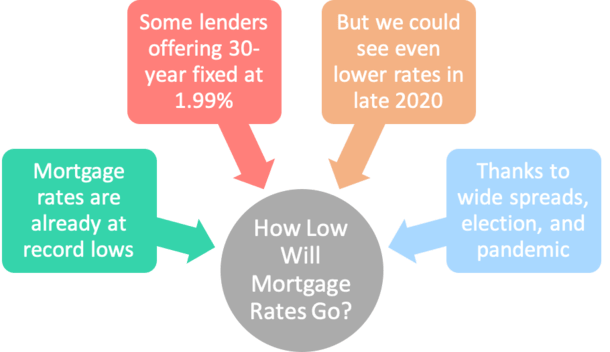 As noted, mortgage rates are hitting record lows so often it’s becoming a bit of a non-event. Heck, I don’t even write about it anymore.

And it’s hard to know if homeowners are even excited about it at this point. When something happens on a weekly basis, it’s difficult to garner any sort of novelty.

Oddly, you can’t blame folks for thinking that way because they’re probably right.

If you asked me right now if I thought mortgage rates would move even lower from their current levels, I’d say YES with no hesitation.

That’s not just a gut feeling – it’s based on math and data and events going on in the industry and the world.

Just Look at Spreads If You Want a Hint

For one, the spread between 30-year fixed mortgage rates and the 10-year Treasury (which they track) is super wide at the moment.

While yields did “jump” a tad in the latest week, the spread is still historically large, around 225 basis points.

Typically, the spread might be 170 basis points or even less, meaning the 30-year fixed could easily be pricing around 2.25% today if spreads were more normal.

This implies that mortgage rates have plenty of room to move lower, despite hitting a fresh record low just last week.

The next clue that mortgage rates may fall even more is the fact that a 2.25% mortgage bond coupon has already been introduced, all the way back in April.

That came four months ago, and we’re now in a very different, arguably more volatile and fragile August, which tells me it’s a matter of time before the 30-year fixed moves to that range and possibly beyond it.

Finally, we’re already seeing certain mortgage lenders offer the 30-year fixed below 2%. So it’s not just a question of if, it’s already a reality.

This week, wholesale mortgage lender UWM announced the availability of a 1.999% 30-year fixed mortgage rate via its Conquest program.

In order to get that rate, you need to work with a mortgage broker since UWM doesn’t work directly with the public.

You also need to qualify for that rate by being a solid borrower with a vanilla loan scenario, e.g. excellent credit score, low LTV, conforming loan amount, etc.

And there’s a good chance you’ll need to pay mortgage discount points to obtain that rate.

That brings up another important point – it may not be wise to pay points right now given the trend of lower and lower mortgage rates.

If you’re just going to refinance your mortgage a second time a couple months later, you certainly don’t want to pay lots of money upfront for a home loan you’ll barely keep, and thus not actually benefit from.

Now in terms of how low mortgage rates will go, that’s anybody’s guess, but at this point I wouldn’t rule anything out.

We’re already seeing mortgage rates in the 1% range, and we’ve got the potential for a very wild second half of the year with a contentious U.S. presidential election and a stock market that refuses to read the writing on the wall.

The only real caveat, as I’ve mentioned before, is the lower you go, the harder it is to see massive improvement.

After all, if mortgage rates are already in the 1% range, how much better can they really get?