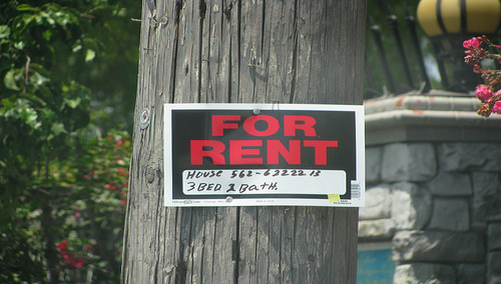 Good news, if you recently got foreclosed on and are back in the rental market…

Apartment owners and other landlords are beginning to overlook foreclosure-blemished credit reports when considering a new tenant, according to the Wall Street Journal.

Instead of denying potential renters because of a recent foreclosure record, some landlords are apparently targeting these types of borrowers.

One property group owner out of Las Vegas actually buys lists containing information of borrowers on the verge of losing their homes as a kind of lead service.

And some landlords say homeowners are searching for apartments before actually losing their homes to foreclosure.

Another property group, which controls 13,192 units in nine states nationwide, has changed its scoring algorithm for potential renters so foreclosures don’t automatically disqualify them.

At the same time, others still see a foreclosure on a credit report as a big red flag, concerned (for good reason) that it reveals an unacceptable credit risk.

Although Dallas-based ResidentCheck offers a credit-risk score model that determines if a foreclosure was just an isolated incident, or part of a string of bad choices that led to an overextended credit profile.

The apartment sector has seen compound annual total returns fall by more than half for the 12 months ended March 31, and occupancy levels are at their lowest in years.

Barclays Capital estimates 2.8 million foreclosure starts this year, with 3 million expected by 2010, so clearly landlords will have to be more flexible.

It’ll also be interesting to see if credit scoring companies like Fico adjust their algorithm to reflect the increased number of foreclosures, which surely must mean less than they used to based on the sheer volume.