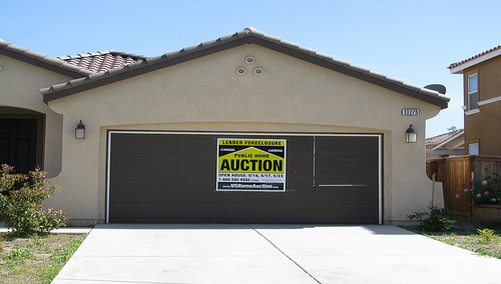 Foreclosure sales jumped 31.9 percent last month in the Golden State, following a 35 percent increase a month earlier, but many potential sales are being held back, according to ForeclosureRadar data.

Notices of Default, which are the first step in the foreclosure process, fell 4.2 percent from April, and were down 3.1 percent from a year ago.

Notices of Trustee Sale, which set the auction date and time, increased a hefty 42 percent from April and 24.1 percent from a year earlier, indicating foreclosure sales are likely to rise in the months ahead.

However, of foreclosure sales currently scheduled, 40 percent are being postponed to a future date at the mortgage lender’s request, while another 33 percent are being held back based on a mutual agreement between lender and borrower

“While many complain that lenders are foreclosing too aggressively, and others claim a wave of foreclosures sales is imminent, the data actually shows that lenders are doing everything possible to delay foreclosure,” says Sean O’Toole, founder and CEO of ForeclosureRadar, in a release.

“The reality is that we have very few homeowners being foreclosed on when viewed as a percentage of those scheduled to be foreclosed on, in default, delinquent, or upside down in their mortgage.”

That may be because the majority of foreclosure sales taken to auction continue to be returned to the lender, with 87.9 percent failing to sell to third-parties in May.

This is despite the fact that 83 percent of sales taken to auction last month had a discounted opening bid that averaged just 58.6 percent of the loan value.

Lenders may intentionally be holding back sales for a number of reasons, including capacity overload, accounting tricks to minimize banks losses, and efforts to minimize home price declines; this is what many now refer to as the shadow inventory.