I discuss the risk of a housing bubble from time to time because let’s face it; it’s always going to be a concern in this day and age.

Real estate has become extremely speculative, and with that comes quicker highs and lows. So when’s the next bubble coming, you ask?

In the past, I’ve written that some housing markets may have already experienced a new bubble since the latest outright crisis, while others may simply be suffering from an affordability crisis.

Regardless of these opinions, with the home price gains we’ve realized since the housing bust, there’s certainly reason enough to worry.

After all, when home prices swing markedly higher in such a short period of time, it’s not unreasonable to expect some giving back. 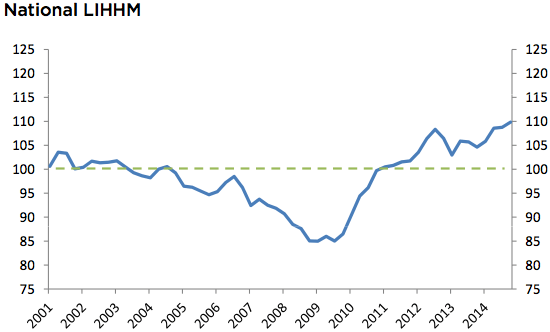 Believe it or not, the housing market is apparently the healthiest it has been since 2001. In fact, it hasn’t ever been healthier, per the Leading Index of Healthy Housing Markets (LIHHM) from Nationwide, which began 14 years ago.

The current value of the LIHHM is 109.8, up slightly from a quarter earlier but well above the 100 “breakeven value.” In other words, there’s little risk at the moment. And if anything, more upside ahead for the housing market.

Put another way, the reading means we have little reason to worry about a downturn over the next year, despite the recent home price gains.

In fact, none of the nation’s largest metropolitan statistical areas (MSAs) are in negative territory, and just six are neutral.

Further, only two MSAs in the nation are negative (Bismarck, ND and Atlantic City, NJ), and they’re even close to being neutral.

Interestingly, the only thing really holding back the market from being even healthier is “a continued tight mortgage lending environment,” per Nationwide’s associated Health of Housing Markets (HoHM) Report.

But with new low down payment options like the Fannie 97 LTV mortgage and existing programs from the VA, FHA, and USDA, it would seem that might not be an issue any longer.

For the record, the LIHHM is based on four factors, including:

A score between 75 and 125 is possible, with 100 being neutral. There are also performance ratings for each MSA, from -4 (very negative) to +4 (very positive).

Predict the Future by Looking at the Past 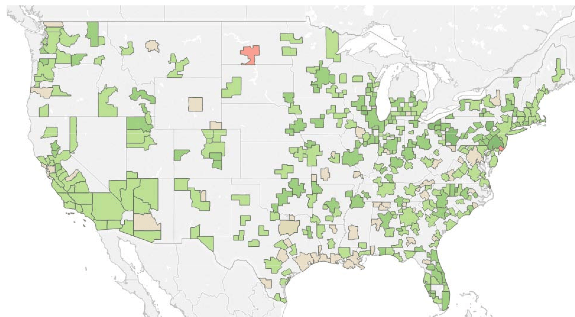 Take a look at the map above. As you can see, much of the country is currently in the green, which is a good thing. As previously mentioned, there are just two negative (red) spots in the country, and they are only at -1, not -4.

And those tan colors are all neutral zones.

Now look at the map below, which is the same map from the fourth quarter of 2005. 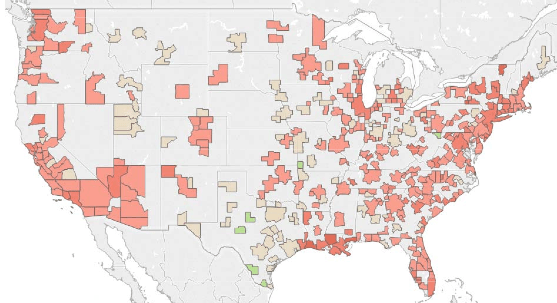 Full of red, some neutral, and just a few green spots in places like Texas.

During that time the housing market was a mess, so this indicator has actually proven itself in the past.

Assuming it continues to be accurate, we don’t have any pressing concerns at the moment because the current map looks a lot better than it did in 2005, just before the real estate market began to peak and then crash.

Furthermore, there seems to be a time lag between when the map turns red and when home prices take a hit.

Using that logic, there’s still plenty of time before we need to really start worrying again…

previousMillennials Clueless About Closing Costs
nextSeven Million Homeowners May Benefit from a Refinance, But That Could Change