There has been increased fear of another housing bubble for a while now, with some markets already identified as bubbles and others supposedly suffering from an affordability crisis.

Signs of a possible housing bubble include the following:

Overall, the price of a median-priced home required 26% of median income in October in 475 counties nationwide.

This compares to a historical average of 28% going back to January 2000, and is still well below the 41% average seen in each county’s peak month during the most recent housing bubble.

In fact, just six counties were deemed less affordable in October than during their peak between 2005 and 2008, thanks in part to higher incomes and low mortgage rates.

However, 21% of counties nationwide are now less affordable than their historic averages, including hot spots like Los Angeles, Orange County, San Francisco, Dallas, San Antonio, and even parts of Detroit.

And six percent (30%) of counties are both unaffordable by historic measures and experiencing rising foreclosure rates on recent loans.

RealtyTrac vice president Daren Blomquist noted in the report that affordability and foreclosure rate by loan vintage are key metrics that help determine if a certain market is at risk of another pricing bubble.

He added that about 20% of markets have now surpassed their historical affordability norms, a “strong sign” that a bubble is forming or that appreciation will soon plateau until wages have a chance to catch up.

The fact that foreclosure rates are rising on new loans could be an indication that affordability is once again a concern as buyers stretch themselves too thin. 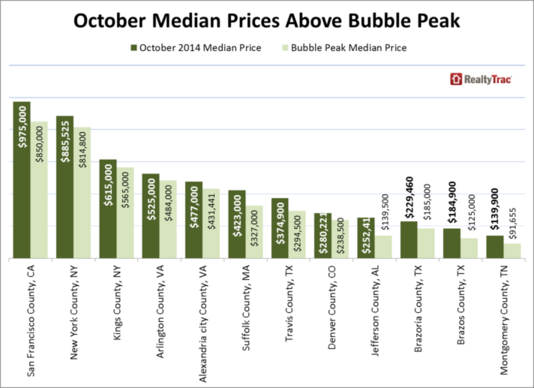 In October, a total of 58 counties had higher median home prices than their prior peaks seen in 2005 to 2008.

The usual suspects made this list too, including San Fran, New York, Boston, and Denver, along with Charlotte, Raleigh, and Buffalo.

However, low interest rates are keeping homes in these highly sought-after areas affordable. But if rates rise and home prices continue to climb, the story could change in a hurry.

But nearly half (48%) of counties nationwide are still historically affordable and experiencing flat or declining foreclosure rates. So the whole nation isn’t yet at risk of another housing bubble.

The most affordable regions include Lansing, Syracuse, Cincinnati, Atlanta, and Buffalo.

There’s clearly some divergence in terms of affordability and home price peaks. Put another way, some areas of the country are experiencing new all-time highs but are still historically affordable.

The concerning thing is the unaffordable places, especially at a time when interest rates have never been lower. It doesn’t bode well for them or those at new highs, unless interest rates stay low forever.

Read more: When will the next housing crash take place?