Predatory Mortgage Lending: What to Watch Out For 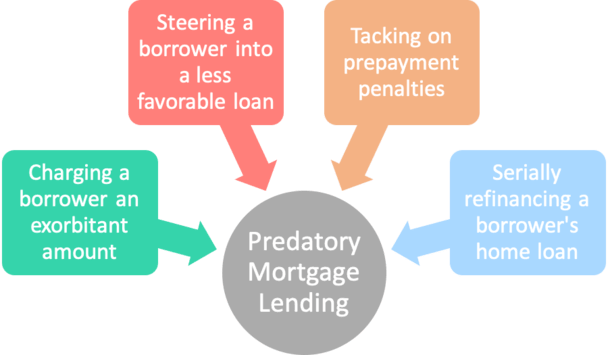 Predatory mortgage lending means different things to different people. To some, it may involve charging too much to obtain a mortgage.

For others, it may come down to withholding important information that the borrower has a right to know. Material information that could affect their decision to go through with the loan or go elsewhere.

It can also involve more cut and dry shady practices such as deceiving borrowers by failing to include all associated costs upfront, forging documentation, or simply leaving out required loan documents such as the Loan Estimate and Closing Disclosure.

Either way, what’s clear is that predatory lending involves unethical practices that may harm the borrower.

Charging Too Much for a Home Loan?

This is always a touchy subject because individuals, especially those working for themselves, don’t like to be told what their time and energy is worth.

However, most banks and lenders put a cap on what a broker or loan originator can earn on a given home loan. For prime (A-paper) mortgage companies, this number usually falls between 2-3% of the loan amount.

That is still a very hefty payout for a single loan. Imagine a $750,000 loan amount with a 3% commission. That’s $22,500. To some, it may seem quite excessive. It’s potentially more than a real estate agent would make for the sale of the same property.

And to many originators, 3% is average, if not a low commission in their eyes. The gray area lies in what people feel is right to charge a borrower. For subprime lenders and non-QM lenders, this percentage can be much higher, exceeding 5% in many cases.

Often times, mortgage brokers or loan officers feel they can charge as much as they want because the borrower “doesn’t qualify” or “doesn’t deserve” to get the loan.

Because the broker is pulling strings, finding loopholes, and putting themselves at risk with what might be construed as shady practices, they may hit the borrower’s wallet hard.

Many of these individuals could find themselves in a tough spot, and simply accept whatever rate the broker or bank will offer them just to get in the home.

Some borrowers might have a looming contingency or close of escrow date, and will have little choice but to take a higher interest rate just to get the deal done and avoid losing their earnest money or the home itself.

Another category that might be deemed “predatory” has to do with what can be seen as unfavorable or unfair loan terms.

For example, many home loans originated back in the early 2000s contained prepayment penalties, which restrict when you can sell your home and/or refinance without penalty.

While they may not be inherently predatory, if a lender offers a borrower a 6-month ARM with a 3-year hard prepayment penalty, whereby they can’t sell or refinance during that period, it could be looked at as predatory.

After all, if mortgage rates shoot over up over that period, the borrower would be stuck between a rock and a hard place.

Or worse, the same lender would make money on that borrower by offering them a new mortgage to mitigate the damage.

Same goes for steering a borrower into a certain loan product that may benefit the originator more than the borrower.

For example, if the lender makes more money on FHA loans as opposed to loans backed by Fannie Mae and Freddie Mac, and pushes the borrower into that more profitable loan, even if the terms are worse, it would be deemed predatory to many.

Funnily enough, a former higher up at Fannie Mae once referred to the entire FHA loan program as predatory because of the way low-risk borrowers subsidized the higher-risk ones. Whether he’s biased is up for debate, but he makes some interesting points nonetheless.

This can happen with adjustable-rate mortgages too if one lender wants to win over the borrower with a lower interest rate, even if the homeowner is really only interested in a 30-year fixed-rate mortgage.

For example, Lender A might offer a rate of 4% on a 30-year fixed, while Lender B offers a 5/1 ARM at a much lower rate of 2.5% in order to steal the deal. Whether that’s wrong is up for debate.

It’s certainly gray, and depends on how much the lender explains to the borrower, or how much convincing (pushing) they do.

If they told the borrower that they’re both 30-year loans, but ignored the adjustable component, it’s wrong. However, consumers should know how these things work too before even having the conversation.

Another prevalent issue is serial refinancing, where a bank or broker will continually refinance a borrower’s mortgage, even if it provides little benefit. As noted, they can make sizable commissions, regardless of whether the borrower gets anything out of it.

Meanwhile, the homeowner wastes their time and gets saddled with a mortgage that never seems to get paid down.

The list goes on…there are endless types of shady tactics out there, and new ones being created all the time.


The bigger problem is that “predatory lending” is subjective, especially since banks and lenders specialize in different stuff, and may have different maximum fees they can charge.

This is especially true if a given lender originates small loans. Because commission is typically based on loan amount, a percentage thereof, a tiny loan amount will require a high percentage fee.

This makes it hard to define, and even harder to control. Additionally, certain mortgage lenders specialize in riskier loan programs that statistically have a greater chance of jeopardizing a homeowner.

But if said borrower needs such a program in order to become a homeowner, who is accountable?

Ultimately, the onus is on the consumer to make sound choices, with respect to both loan program and who they choose to work with.

Plenty can go wrong if they aren’t diligent, but if a particularly unscrupulous loan officer gets involved, they could do everything right and still wind up in a bad spot.

At the same time, banks and lenders have to be honest and comply with all fair lending laws to ensure they hold up their end of the bargain.

To sum it up, the key to avoid being a victim of predatory lending is knowing your rights, carefully reading anything you sign or agree to, and educating yourself about the home loan process.

At the end of the day, a mortgage application is a big deal, and shouldn’t be approached casually! If you have doubts, speak up and/or do your own research to make sure you aren’t getting a raw deal.