Private Label Mortgages Root of Problem, But Not Focus of Foreclosure Prevention 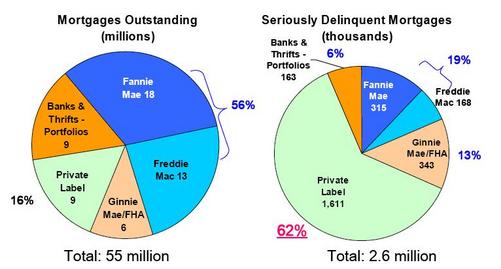 In an earlier post, I mentioned that some major critics like the MBA are worried about the impact of Obama’s foreclosure prevention plan on private-label securities, those not covered by Fannie Mae and Freddie Mac.

The chart above illustrates that concern, as private-label securities (jumbo, Alt-A, subprime) account for most of the seriously delinquent mortgages that are fueling this mortgage crisis.

As you can see in the pie chart on the left, Fannie and Freddie own or guarantee more than half (56 percent) of the 55 million outstanding mortgages, while private label account for just nine million, or 16 percent.

Moving to the pie chart on the right, we can see that those same private label loans account for 1.6 million delinquencies, or 62 percent of all seriously delinquent mortgages.

That compares to just 168,000 seriously delinquent mortgages over at Fannie and Freddie, which account for less than 20 percent of the problem.

Now Obama’s new “Homeowner Affordability and Stability Plan” mainly addresses GSE-owned and backed loans, which according to these graphs, isn’t the core issue.

FYI, this data is from the third quarter of 2008, sourced from Freddie Mac, used today in a presentation by FHFA director James B. Lockhart.

While speaking about the slide (pictured above), Lockhart said, “Let me pause on these pie charts for a moment, because they represent the crux (not the pie crust) of the problem we face in foreclosure prevention.”

“If we are going to stabilize the housing market, we have to address that 62 percent. We believe Fannie Mae and Freddie Mac must be leaders in improving, promoting, and enforcing industry standards and best practices for all mortgages.”

It sounds like we may need a new plan.

2 thoughts on “Private Label Mortgages Root of Problem, But Not Focus of Foreclosure Prevention”