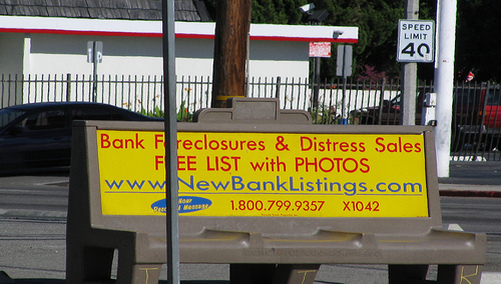 Last month, an estimated 29,458 new and resale homes and condos sold in California, according to DataQuick.

However, of the existing homes sold, 60.4 percent had been foreclosed on in the prior 12 months, more than double the 29.6 percent share seen a year earlier.

Last month’s median was the lowest since May 2001, when it stood at $220,000.  The price drop could be attributed to both price depreciation and a shift in the types of homes selling and how they’re financed.

“We’ve heard a lot of talk, regarding the decline in home values, about how ‘no one wants to catch a falling knife.’ But for months we’ve seen quite a flurry of sales activity in many inland areas where prices have fallen more in line with local incomes,” said John Walsh, DataQuick president, in a release.

“We can only assume,” he continued, “that many first-time buyers, investors and others buying in these areas have concluded it’s not worth trying to time the price bottom perfectly. They’re happy to lock in substantial discounts relative to the peak. Whether the inland sales pace holds will hinge on factors such as the health of the job market, the availability and cost of financing, and the new efforts to stem foreclosures and halt price depreciation – efforts that could eventually tame inland bargain hunting.”

The good news is the typical mortgage payment home buyers committed themselves continues to fall; it was just $969 last month, down from $1,110 in December and $1,790 in January 2008.

On a troubling note, FHA loan financing accounted for 40.4 percent of purchase loans in SoCal and 25 percent in the Bay Area, a sharp, and some may say unhealthy, rise from last year.

Meanwhile, jumbo loans accounted for just 12.5 percent of sales in the Bay Area and 9.2 percent in SoCal, down from 62 percent and 40 percent, respectively, in August 2007, before the mortgage crisis got underway.

previousPrivate Label Mortgages Root of Problem, But Not Focus of Foreclosure Prevention
nextFreddie Mac Investigating Itself