If you haven’t been feeling 30-year mortgage rates recently, maybe an ARM might suit you better, especially if you don’t plan to stay in your home for a very long time.

There are a variety of adjustable-rate mortgages available to homeowners today, with varying fixed-rate periods.

One of the shorter of the hybrid-ARMs, which are home loans that are fixed initially before becoming adjustable, is the “3/1 ARM.” Let’s learn more about how it works.

As the name suggests, it’s an adjustable-rate mortgage with two key components.

The first number (the “3”) indicates the period of time in which the mortgage interest rate is fixed. In this case, it’s three years. This means your initial interest rate won’t budge for 36 months.

This is great news if you fear a rate adjustment (higher), and also quite handy if you only need short-term mortgage financing.

The second number (the “1”) represents the adjustment frequency, which as you may have guessed, is annually. Yep, this means the rate can adjust each year once the first three years are up.

For the record, the 3/1 ARM is still a 30-year loan, so you get a fixed rate for the first three years, and an adjustable rate for the remaining 27 years. This is why it’s sometimes referred to as a 3/27 ARM loan as well.

Once those three years are up, your interest rate will adjust based on the margin and associated mortgage index, such as the LIBOR.

This is known as the fully-indexed rate (FIR), and is limited by the caps in place, which dictate how much a rate can rise or fall initially, periodically, and over the life of the loan.

Let’s look at an example:

Using our example, the interest rate may adjust 2% above the start rate upon its first adjustment, so an increase from 3.25% to 5.15% would be acceptable.

Obviously, this would be a big hit to the wallet, which is why most homeowners would look to sell their home or refinance their mortgage before that time.

Unfortunately, mortgage rates may not be attractive during the three-year period after you take out your loan.

It’s also possible that you won’t qualify for a refinance if your credit score or income drops, or if underwriting guidelines change over time. Flagging home prices could also dent your plans to refinance or sell.

In short, you’re taking a pretty big risk for a lower interest for 36 months, so have a plan in place if and when rates increase.

Now let’s talk about 3/1 ARM rates, which as I alluded to, come cheaper than 30-year fixed-rate loans.

How much cheaper is the big question, as the reduced rate will determine if a 3/1 hybrid ARM is worth the risk.

After all, there is plenty of risk involved when your mortgage rate isn’t set in stone. If it can move substantially higher, you could face mortgage payment problems in the near future, and potentially lose your home if things really take a turn for the worse.

I dug around a bit to see how 3/1 ARM rates stack up against the 30-year fixed and the 5/1 ARM, which offers an additional two years of fixed-rate safety.

I found that rates vary considerably, but can often be significantly cheaper than 30-year fixed-rate mortgages.

For example, I saw some 3/1 ARM rates as low as 2.75%, whereas the 30-year fixed was pricing closer to 4%, with no mortgage points on either option.

Of course, I saw closer spreads too, with some 3/1 ARMs priced at 3% or even 3.5%. But you should expect a rate discount of at least half a percentage point, maybe more if you’re lucky. 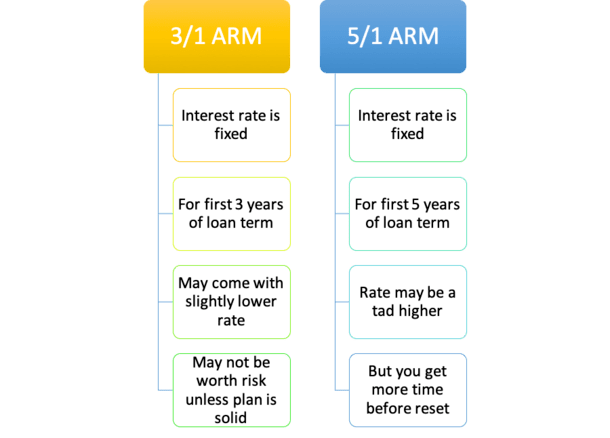 However, the 3/1 ARM isn’t offered by all mortgage lenders. In fact, Wells Fargo, Chase, and Quicken Loans don’t even advertise them, though both openly offer the 5/1 ARM and the 7/1 ARM.

This isn’t to say they definitely don’t offer the 3/1 ARM, it’s just not listed as a loan option.

Ultimately, the 3/1 ARM and 5/1 ARM are pretty similar, so banks and lenders tend to offer the 5/1 ARM instead, especially since it provides two extra years of fixed rates.

Another reason it’s more common today is due to the Qualified Mortgage (QM) rule, which requires lenders to consider the maximum interest rate that may apply during the first five years.

Because 3/1 ARMs will see their first adjustment after just three years, lenders have to consider the fully-indexed rate (margin + mortgage index), which might be a lot higher than the start rate.

As such, the borrower may have more difficulty qualifying for a 3/1 ARM thanks to DTI ratio constraints and the like.

In other words, lenders may just avoid the home loan program altogether in favor of simpler loan types like the 5/1 ARM.

If you’re looking for a jumbo loan, you might have more luck finding this type of mortgage loan as high-net individuals often favor shorter-term financing.

These loans were actually quite popular before the mortgage crisis that took place in the early 2000s, but have since become more of a rarity.

Ultimately, three years can come and go in the blink of an eye, which partially explains their relatively low popularity.

previousWhat Will Happen to Home Sales If Mortgage Rates Rise to 9%?
nextThe Top 10 Cities Where Cash-Out Refinances Are King