Most mortgages carry a 30-year term, even if they’re adjustable for some period of those three long decades.

But in some cities, it’s reasonably possible to pay off your mortgage a lot earlier thanks to low home prices and decent wages.

Now, this isn’t to say you should pay your mortgage down aggressively…it’s just that you could, if you were so inclined.

Unsurprisingly, most of the cities in the top 10 list can be found in the central states, like Ohio, Michigan, and Missouri. But there are also spots in Pennsylvania and New York where home buyers can get free and clear in no time at all. 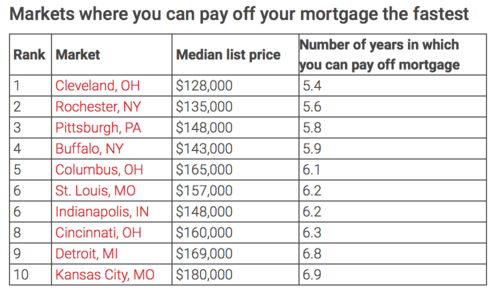 The data nerds over at Realtor came up with the list above by calculating median home prices in the top 50 markets in the U.S. and lining them up with the recommended 28% housing DTI ratio.

The result is a short 5.4 years to pay off a median priced home of $128,000 in Cleveland, Ohio. Sure, your football team won’t be very good, but at least you’ll have a football team.

And if you focus on tackling the mortgage, you’ll only have to pay taxes and insurance on your digs in little more than half a decade.

That’s certainly pretty cool if you’re not one to carry lots of debt. And you might get a decent water view on the “North Coast,” a term I’ve never heard until today.

You can pull off the same magic in cities like Rochester, NY, Pittsburgh, PA, and Buffalo, NY.

There are plenty of other major metros on the list as well, including the likes of St. Louis, Indianapolis, Cincinnati (hard to spell, but decent football), and Kansas City (great baseball).

In Indy, some 71% of the homes are affordable to prospective home buyers, and St. Louis was deemed a top 10 up-and-comer by Realtor.com thanks to strong projected home sales and future home price appreciation.

So if you don’t want to worry about the mortgage for more than a handful of years, as opposed to into your old age, check out those cities. You may even be able to take out a 15-year or 10-year fixed mortgage at the outset to save a ton in interest and grab a lower mortgage interest rate.

Conversely, if you want to keep your mortgage forever, look at these 10 superstars. 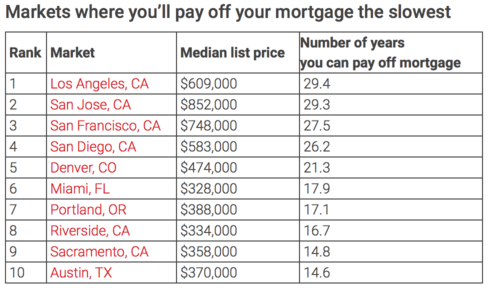 In Los Angeles, it will actually take you nearly the full 30-year term to pay off your mortgage. The annual income of around $100,000 in the 90210 requires a lengthy 29.4-year amortization period.

So no 15-year fixed for you unless you’re making big bucks. You’ll need a 30-year mortgage.

The same goes for much of the Bay Area, including San Jose and San Francisco, and in sunny San Diego. That explains why lenders are increasingly offering zero down mortgage options like the POPPYLOAN.

Hot cities such as Denver are starting to get a hair expensive too seeing that it’ll take the average buyer 21.3 years to pay off the mortgage without breaking the bank or raiding the retirement nest egg.

It’s a little bit better in places like Miami and Portland, but these cities are clearly getting more expensive as homeowners from nearby states (and countries) flock to affordability.

However, there are still some relative bargains to be had in places like Sacramento, California and Austin, Texas where it can take less than 15 years to get mortgage-free while still saving for retirement and living comfortably.