Should You Pay Off Your Mortgage Before Retirement? There Are Pros and Cons

If you speak to any financial planners or so-called experts on the matter, they’ll probably say, “Yes, pay off your mortgage before you retire.”

But is it fair to make the same conclusion for all individuals? Probably not. And times are changing…

Carrying a Mortgage Into Retirement 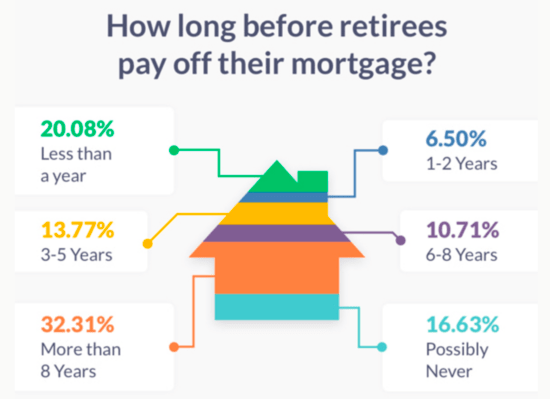 The logic to burning the mortgage before you retire is that you’ll be on a fixed income and you’ll need to stick to a strict budget to ensure you have cash on hand for all your living expenses.

And potentially even more money to pay for expensive medical care as you get really old.

There’s also the fear of losing your home because you can’t keep up with mortgage payments, the last thing any older retired individual would want to deal with.

Others may go even go a step further in saying that paying off a mortgage can lead to retirement, or help you retire faster and at a younger age.

While that might all be true, it’s certainly not an open and shut case as everyone’s situation is different.

The answer to the question really goes back to whether you think carrying mortgage debt is a good deal or not, relative to other options.

And if you’re the rational type who runs the numbers, or the emotional type who can’t handle any sort of debt overhang, whether it’s actually hurting you financially or not.

The Trend Is Changing

Back in the day, it was common to pay off the mortgage in full before retirement. Of course, at that time mortgage interest rates may have been in the double-digits, making them quite a burden.

This left homeowners with few winning investment alternatives able to beat that rate of return.

By that, I mean if your mortgage rate was set at 14%, you’d have to find an investment that yielded more than 14% to not allocate extra dollars to your home loan balance.

Today, mortgage rates are near their all-time lows, with many existing homeowners now holding onto rates in the 2-3% range.

For these homeowners, it’s actually very easy to beat that rate of return, even if the stock market doesn’t yield stellar returns year after year. And even if we experience another recession and see the price of equities and other investments fall.

This might explain why fewer and fewer retirees and near-retirees are making it to the finish line with a free and clear mortgage.

Fewer Than Half of Retirees Are Mortgage-Free 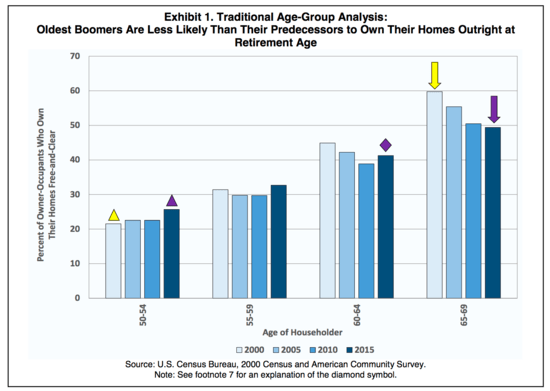 There are countless surveys and studies that reveal this, including one from mortgage financier Fannie Mae that revealed fewer than half of Baby Boomer owner-occupants aged 65 to 69 in 2015 were mortgage-free.

And while some younger homeowners are actually experiencing higher levels of free and clear homeownership, their future projections are also negative.

Another recent survey from mortgage banker American Financing found that 44% of 60- to 70-year-old homeowners will retire while still holding a mortgage.

Additionally, 32% of respondents expect it to take another eight years to pay the darn thing off. What’s worse, some 17% of respondents said they may never pay it off in full. See top image above for more on that.

So it’s clear that the trend of paying off all your debt before retirement is weakening, perhaps due to increased household debt, overspending, the prevalence of low-down payment mortgages (who still puts 20% down on a home purchase?), poor planning, and so on.

Obviously life is getting more expensive, especially for those with kids going to pricey colleges who don’t rely on scholarships and student loans.

And everything else seems to be going up in price too, despite the fact that mortgage loan financing is actually more attractive than it has been in decades.

So where does this leave us? Well, like anything else, there are pros and cons that should be discussed and considered. There may also be a hybrid solution that doesn’t have to be all or nothing.

Pros to Paying Off the Mortgage Before Retirement

The obvious benefit to paying off any debt is that you won’t have to keep making monthly payments. Clearly this can improve cash flow and lessen your chances of losing the underlying asset.

But owning a home isn’t free just because you’re sans mortgage. There are still property taxes that must be paid, homeowners insurance, utilities and upkeep, potential renovation costs, and so on.

It can actually be really expensive to own a home free and clear. Of course, having all your money focused on those other costs is probably better than having a chunk of it go toward a mortgage.

If you adopt an aggressive approach to paying off the mortgage early, you may also budget more effectively in the decades leading up to retirement.

Knowing more of your money isn’t discretionary means cutting out the fat like the nights out and the luxury items you might otherwise have splurged on.

So even if the rate of return on your home loan isn’t great, you might wind up with a lot more wealth in the future if you spend smarter along the way.

And there might just be a correlation between paying off your mortgage and retiring earlier. A lot of folks are working longer into their golden years because of the mortgage. Pay it off and you can take the day, week, and next decade off.

Cons to Paying Off the Mortgage Before Retirement

Now let’s talk about some drawbacks of paying off your home loan before retirement.

One timely negative is the fact that mortgage rates are so darn cheap. Plenty of current homeowners have record low mortgage rates that will likely never be cheaper.

And in a few more years, basic savings rates will probably surpass the interest rates on many of these home loans.

Parking your money in a savings account yielding 4% could actually provide a better rate of return than paying extra toward your mortgage.

Another issue is dumping too much of your hard-earned money into an illiquid asset. Sure, it’s getting easier on some level to tap your home equity, thanks to novel new approaches like shared appreciation and so on.

But it’s still going to cost you to get that money out assuming you need it. There’s also the idea of having all your eggs in one basket, with a high concentration of wealth in a property that may or may not retain its value.

It’s also nice to have some dry powder set aside for an opportunity that might come along, such as an investment property or a major stock market selloff. You want to make sure you’ve got some diversification beyond just a paid-off house.

Just think of those at or near retirement when the housing market crashed in the early 2000s. I’m sure plenty of them wished they hadn’t paid off their home loans entirely.

Doing so could make you house poor if all your money is tied up in a property.

Conversely, those who simply paid off their home loans on schedule may have had extra cash to buy a second home on the cheap when home prices plummeted. Or maybe had down payment gift funds to give to their child.

You may also be doing yourself a disservice by not allocating funds to a retirement account or other investments that might build wealth at a much faster and attractive rate.

Ultimately, there is no one-size-fits-all solution, and perhaps it’s not an easy question to answer with a blog post. It probably requires a serious sit down and some thoughtful number crunching, including looking at retirement contributions and tax consequences.

And a hard look at life plans, retirement goals, and so on.

For those who can’t decide, there’s always a middle-of-the-road approach like paying a little extra or making biweekly mortgage payments to whittle the mortgage down a little faster.

Getting a Mortgage in Retirement

Lastly, if your home is free and clear and you need to take out a mortgage in retirement, know that it can be difficult.

It’s not necessarily impossible, but with limited income from sources like Social Security and other regular distributions or investments, it can be more challenging.

Those who are asset-rich shouldn’t have as much trouble, but at that point you’d question why you’d need a home loan to begin with.

There are also options like a reverse mortgage, which allow you to tap equity without taking on monthly payments. But then your heirs lose out and there are other risks like the potential loss of your home.

One other alternative is to take out a HELOC before retirement so you have a cash access line in the case of an emergency, or simply if you want cash for any reason.

You can use it if you want to, but leave it untouched if you don’t need it during retirement.