A Look Inside the Books of Rocket Companies, Inc.

The company, which bills itself as the nation’s largest mortgage lender, plans to trade on the New York Stock Exchange (NYSE) under the ticker symbol “RKT.”

Moving Toward the Rocket Mortgage Brand, Away from Quicken?

The first takeaway here is that they seem to be embracing the Rocket Mortgage brand over the Quicken Loans brand, with the latter still paying royalties to Intuit for the use of that name, per the S-1.

As you can see from the graphic provided in the S-1, they’ve got quite a few affiliated companies under the Rocket Companies umbrella that cover virtually all aspects of the home buying and mortgage lending process.

Their Rocket Homes unit refers home buyers who have been pre-qualified for a mortgage by Quicken Loans to a network of third-party partner real estate agents.

Consider them a one-stop shop, like others in the business are trying to achieve (see Redfin Mortgage and Zillow Offers). 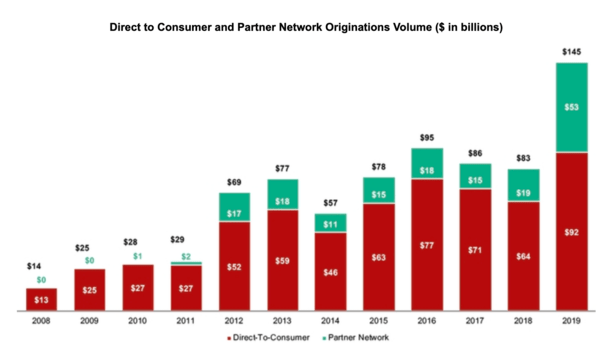 In case you weren’t aware, the company has a major wholesale lending operation as well via Quicken Loans Mortgage Services (QLMS), which accounted for about 36% of total production in 2019.

That was a big jump from 2018 and earlier years, and perhaps an effort to contain crosstown rival United Wholesale Mortgage (UWM) that solely works with mortgage brokers.

They’ve also made a push into the Canadian mortgage market with their loan origination platform Lendesk and mortgage brokerage Edison Financial.

And they offer personal loans via the Rocket Loans brand, and used auto financing via Rocket Auto.

To sum it up, they don’t see themselves as a mortgage company.

Rather, they’re a high-growth fintech company looking to command a multi-billion-dollar valuation on Wall Street.

Just How Big Is Rocket Mortgage? 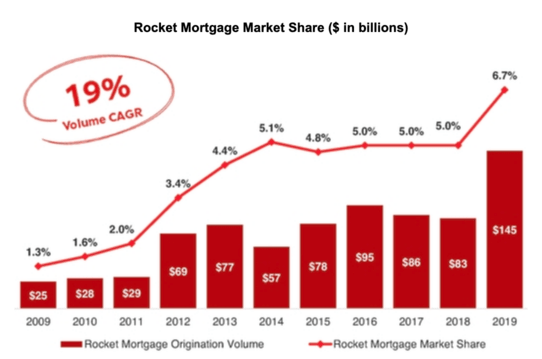 The company has grown its mortgage business tremendously in just a decade, from $25 billion in annual loan origination volume in 2009 to $145 billion in 2019.

They nearly doubled their annual volume from 2018 thanks to a continuous low mortgage rate environment, which has driven record refinance volume.

Of that first quarter volume, roughly $38 billion was conventional conforming, aka backed by Fannie Mae or Freddie Mac.

Another $11 billion consisted of FHA loans and VA loans, with the remaining $3 billion or so non-agency, which may have been mostly jumbo loans.

Since inception in 1985, they’ve originated over $1 trillion in home loan volume, with about half of that coming in just the past four or five years.

And they now take in a staggering $1.8 billion in applications on average per day.

The Rocket Companies, Inc. Is All About Customer Retention 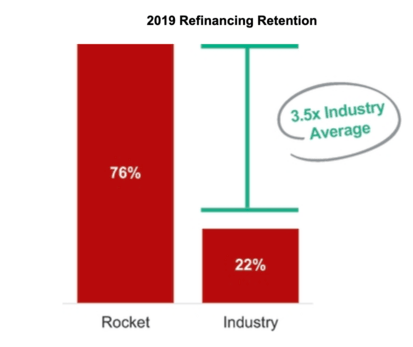 The Rocket Companies Inc. prides itself on customer retention, which is the percentage of existing clients that get a mortgage with them as opposed to going elsewhere.

Last year, they achieved an overall client retention rate of 63%, thanks in part to the fact that they have retained servicing on 92% of their originations since 2014.

The company also boasted a 76% retention rate for mortgage refinance clients versus an industry average of just 22%, per Black Knight data.

With all those loans on their books, you might be curious about delinquencies.

They claim their delinquency rates “are much lower than the industry average,” with just 0.92% if their portfolio 60 days or more behind as of March 31, 2020, compared to over 3.3% for the industry, per Black Knight.

And Rocket Mortgage’s FHA Compare Ratio, which is their default ratio relative to other lenders, was 43% as of March 31, 2020.

That’s the lowest FHA Compare Ratio of the top-20 mortgage originators by closed FHA loan volume during that period.

In summary, they’re originating a ton of relatively clean mortgages, keeping them on their books, and taking advantage of repeat business for their millions of clients over time.

Throw in the many affiliated companies that allow them to make even more money per customer and you can see how big this thing can get.

Oh, and 75% of those using their online platform or smartphone app are first-time home buyers and/or Millennials.

Lastly, they mention the highly-fragmented nature of the mortgage business.

Apparently, the top five companies in the retail mortgage market accounted for just 17.3% of total origination volume in 2019, per figures from Inside Mortgage Finance.

The top two (Quicken/Rocket and Wells Fargo) held just 12% market share. That means they can grow rapidly through acquisitions as well if they so choose.

There’s a lot more goof stuff in the filing if you care to take a look.

Update: The company is offering 150,000,000 shares of Class A common stock with an initial public offering price ranging from $20 to $22 per share. Expects to raise $3+ billion.

previousNow Home Prices Are Expected to Fall By 2021 Thanks to COVID-19
nextKnock Home Swap: Buy, Sell, a Get a Mortgage with Just One Company