Another Reason You Can’t Find a Home to Buy: Investors

Don’t be fooled by Zillow’s recent iBuying exit. The housing market is alive and well, despite some expected seasonal slowing.

Sure, November and December are traditionally soft months in terms of home buying and selling, and asking prices often trickle lower as well.

But it’s typically a short-lived period that springs back to life in the early months of the year, assuming the underlying drivers are there (demand, limited supply, low interest rates, etc.).

Speaking of, 2022 is expected to be another big year for real estate, with one of the latest projections calling for a further 16% rise in home prices.

One thing supporting this perhaps lofty estimate is the fact that investors are dominating the housing market like never before. 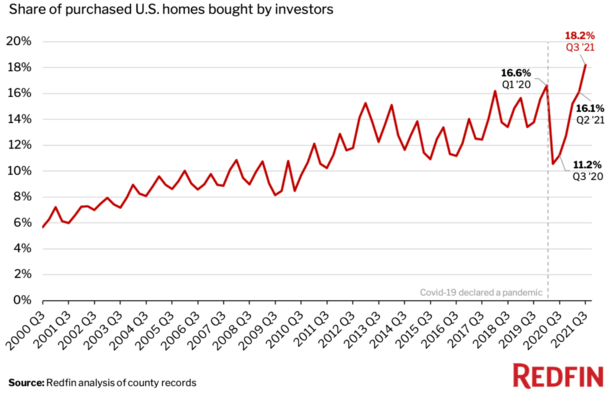 As if it wasn’t hard enough to find a home to buy, now you’ve got to compete with investors from all angles.

We’re talking mom-and-pop investors, institutional investors (the ones that buy up hundreds or thousands of homes), and even Airbnb folks, who buy properties and turn them into short-term rentals, perhaps for eternity.

If you thought they were losing their appetite, think again. Redfin recently noted that investors purchased a record $63.6 billion worth of homes in the third quarter.

This was up from a revised $58.8 billion in the second quarter and nearly double the $35.7 billion seen a year earlier.

While not quite another record, it was the second largest year-over-year gain ever recorded.

Oh, and 76.8% of investor home purchases were paid for with cash, making it that much more difficult to compete if you need to take out a mortgage.

Overall, their record share of the housing market stood at 18.2% during the third quarter, up from 16.1% in the second quarter and 11.2% a year prior.

So basically nearly one out of every five home sales goes to an investor these days.

Investors Are Coming for Your Single-Family Homes 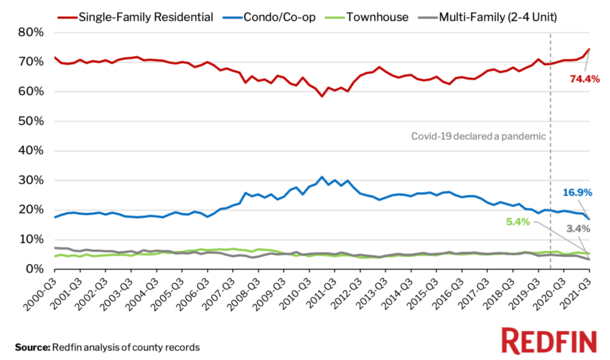 What’s worse is that today’s investors have adjusted their appetite to go after single-family homes as opposed to more conventional rental properties.

In other words, instead of purchasing 1-4 units or condos/townhomes to rent out, they’re buying up everyday homes in neighborhoods across America.

During the third quarter, single-family residences made up nearly 75% of investor purchases, also an all-time high.

As a result, the supply of homes is dwindling at a time when they were already in short supply. To make matters worse, these homes may not return to the market anytime soon.

Instead, they’ll be rented out because rents are surging as well and it’s good business for these investors to simply keep them in portfolio.

Contrast that to a home flipping environment, where investors buy homes and hold them for just a few months or so before returning them to the market at an inflated price.

But at least flippers maintain the supply. This new breed of investors is removing them from the market for an unknown period of time. Possibly forever.

Redfin also pointed out that iBuying represented a “miniscule portion” of overall home purchase volume. So if and when that really ramps up, things could get even uglier.

I’m picturing a world where suburbs are filled with renters and short-term rentals, and many potential home sales don’t go to market because iBuyers step in first.

Where Are Investors Buying the Most Homes?

In terms of where all this investment home buying is taking place, it’s particularly hot in metros like Atlanta and Phoenix.

Nearly a third (32%) of homes sold in the third quarter were purchased by investors in Atlanta, with Phoenix not far off at 31.7%.

Smaller metros like Boise, Idaho have also become hot destinations for those living in pricier regions of the country like California.

And Las Vegas also remains popular with investors, with a 28% investor share in the third quarter.

Meanwhile, Providence, Rhode Island was the least popular with investors with a mere 5.4% share.

Lastly, only two metros saw their investor market share fall from a year ago; New York and San Jose, which dipped 0.6% and 0.4%, respectively.

Consider all of this a good indication that the housing market is poised to experience another big year in 2022 filled with stifling competition and rising prices. Oh and possibly higher mortgage rates too!

previousDirect Access Funding Review: The Best Refinance Rates Out There?
nextWhat Will Cause the Next Housing Crash?