Condo vs. Townhouse: Why It Matters

It’s been a while since I’ve done a matchup, so let’s talk about an important one if you’re in the market to buy real estate. Today, we’ll breakdown the similarities and differences of a condo vs. townhouse.

First things first, let’s define what a condo is, then we can do the same for a townhouse, and finally we can compare the two and talk about how they affect mortgage financing.

What Is a Condo? A Form of Ownership 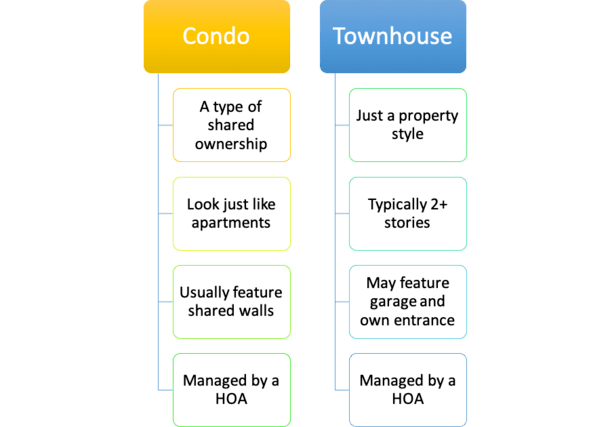 A condo, short for condominium, is actually a Latin word that basically means joint ownership (con+dominium).

It’s technically a type of ownership, though it is commonly used to refer to a building style, whether correct or not.

Practically speaking, it’s best defined as a structure that is divided into individual living units, with common areas throughout that are owned by all members of the association.

If we’re just talking about the aesthetic, condos are basically no different than apartment buildings.

For example, a friend may have told you that they’re renting a condo, which is basically a misnomer and likely uttered to make it sound more appealing.

I think there’s a more positive (valuable) connotation with the word condo than there is with apartment, as if condos are nicer or more luxurious than apartments.

However, this can certainly vary by region of the United States since condos in NYC may be referred to as apartments, and sell for millions of dollars.

Anyway, a condo will typically have shared walls (or at least one shared wall), and is often situated below and/or on top of other units.

It may also share walls with adjacent units to the left and right, depending on the style of building.

If the condo is located in a high-rise building, it could be completely surrounded by other units similar to a hotel.

The takeaway with condos is shared walls along with shared ownership.

You own what’s inside your condominium unit, but what’s outside, such as the roof or walkway, is owned collectively by all the homeowners in the building.

Those items are then managed by a Homeowner’s Association, known as an HOA.

It’s generally made up of a board (governed by select residents), along with a property management company to oversee building maintenance and any issues that may come up.

This is why you pay HOA dues when you live in a condo, because money needs to be set aside for certain costs, such as shared utilities (perhaps water and sewage), gardening, roof repair, exterior paint, and so on.

While HOA dues can be viewed as a negative to condo ownership, because of the explicit and compulsory cost, you could argue that owners of detached single-family residences face the same costs, even if not paid monthly.

You could even reason that a condo owner would be better positioned to deal with unexpected costs versus a single-family homeowner because the money is systematically set aside.

Someone who owns a single-family home may forget or neglect to put aside funds for things like a new roof, maintenance, the unexpected, and even utilities.

Note: Just to complicate matters, it’s also possible to buy a detached condo, which is part of an association but shares no walls, floors, or ceilings. Think free-standing bungalows with common areas jointly owned by all residents.

What Is a Townhouse? Just a Style…

Now let’s talk about a townhouse, also known as a townhome, which is similar to a condo and a single-family dwelling, but perhaps best described as a hybrid of the two.

After all, there’s a reason it has the word “house” in its name. It must resemble one!

It differs from a condo (aesthetically) because it typically consists of multiple stories, such as an upstairs and downstairs, and often doesn’t share a ceiling, nor have any neighbors residing below.

The land directly beneath the structure of most townhomes is considered part of the individual unit in terms of ownership too, which is important.

This might be evident on a plat map and/or in the legal description of the property.

A townhome may also have its own entrance, such as an exterior door, along with its own garage, which can also be accessed via the interior of the property.

Picture a condo that has a staircase, or potentially two staircases, one leading down to a garage, and one leading up to a bedroom.

Or envision a house that has adjoining homes on both sides it if you’re outside facing the front of it, as seen above.

Townhomes Often Feature Multiple Stories and Their Own Entrances


A common setup for a townhome is a main floor with a living room, kitchen, and bathroom, a bedroom (or two) and master bath upstairs, and possibly a garage below.

And maybe a front door that is visible and accessible from the street, or via a private staircase.

While those are the main differences, a townhome is similar to a condo in that there will be shared walls, generally to the left and right of the unit.

Most townhouses are row houses, aka rows of narrowish homes with shared walls, but they can also be vertically stacked if located in a large building with many floors, just like a condo.

Similar to condos, the adjacent townhomes will be part of the same HOA and each owner will pay dues to maintain certain shared amenities and common areas.

But townhome owners are often responsible for the interior and exterior of their properties (like the roof) so the dues may be lower versus a condo.

Additionally, a townhouse owner may pay all or most of their utilities themselves. Simply put, less is shared with the community, so dues can be lower relative to condos.

My assumption is townhomes are more common on the east cost of the United States, though you may see them in all cities throughout the country.

There also seems to be a newish trend of building townhomes or so-called “detached single-family condominiums.”

These give homeowners the best of both worlds, perhaps with a little outdoor grassy lawn and patio that can be used exclusively by the owner.

Is It a Condo or a Townhouse? Or Something Else? It Matters If You Need a Mortgage

Now let’s talk about mortgages with regard to condos and townhomes. Things can get tricky fast here, especially because the terms are often used interchangeably.

We discussed a lot of the aesthetic attributes of condos and townhomes, since that’s what most people are interested in, but you might hear that the latter is a type of property rather than a form of ownership.

That’s technically true, especially since townhomes can be rented as opposed to owned, but my assumption is most home buyers are concerned with the layout/style of the property in question, not it’s legal description.

However, when it comes to home loan financing, it can actually make a big difference.

So if you don’t put down at least 25% when buying a home, or have 25%+ home equity when refinancing an existing mortgage, your mortgage rate will be higher, all else being equal.

One exception to this rule is detached condominiums, including site condos, which are exempt from this pricing adjustment.

By detached, I mean not sharing any walls, floors, or ceilings. In other words, free standing. Unfortunately, many condos don’t meet these stringent requirements.

However, this adjustment only applies to mortgages with terms greater than 15 years.

So those who elect to take out 15-year fixed mortgages won’t have to worry about this pricing hit, which is something to consider. Freddie Mac has the same rules.

Another issue affecting most if not all mortgages on condos is outright eligibility, as condo complexes may or may not be approved by agencies like Fannie, Freddie, the FHA and VA.

So certain types of financing may not even be an option to begin with depending on the building in question.

There are also underwriting guidelines that must be met on attached condos, including a review process.

This ensures the building and financials are in good shape, along with issues like maximum single investor concentration (one entity can’t own X number/percentage of units in a single building).

Now to complicate matters even more! That pricing adjustment applies to properties in attached condos, which can include condos and townhomes, since both can be defined as such.

In other words, a property that is built in townhome fashion could be considered an attached condo with regard to mortgage financing, even if it has an upstairs and downstairs and feels much like a house.

Determine If the Property Is a PUD

Lastly, if the property is part of a Planned Unit Development (PUD), it can be exempt from the pricing hit, underwriting guidelines, and the HOA review process typically required for an attached condo or townhome.

It’s generally considered a PUD unit if you own the structure and the land (dirt) beneath it, which includes a designated lot in the complex or subdivision.

Additionally, properties in a PUD can be attached or detached, further obscuring the situation.

As mentioned, condos typically only include the interior of the property, and the land they sit on is considered undivided ownership, which means they own it but aren’t assigned a given percentage. As such, these aren’t PUDs.

If it is a PUD, it’s mostly treated like a single-family residence when it comes to mortgage loan financing. And that can make it easier to obtain a home loan.

For example, you can get an FHA loan on a PUD unit without worrying about whether the complex is FHA-approved.

To sum it up, it’s very important to determine how the subject property is legally defined, along with how the underwriter interprets the property type.

In other words, don’t take the real estate listing page’s (MLS description) word for it.

To err on the side of caution, make sure you can get financing on the property based on it being a condo, even if it turns out not to be one.