PMI vs. Combo Loans: Which Is the Better Choice?

Before the mortgage crisis, it was common practice for borrowers short on down payment funds or home equity to take out two mortgages simultaneously to finance their home purchase or home refinance. This was known as a “combo loan.”

There is some indication that this practice is becoming popular again, and if you decide to go with a combo, the way you structure your loans could save you a ton of money on your mortgage payment every month.

Most banks and mortgage lenders only allow loan-to-value ratios (LTVs) up to 80% because loan amounts exceeding 80% LTV aren’t eligible to be purchased or securitized by Fannie Mae and Freddie Mac, which makes them less liquid on the secondary market.

This is important, seeing that most banks quickly sell off their loans shortly after origination.

Additionally, loans with a LTV ratio greater than 80% typically require private mortgage insurance (PMI), making them a more expensive option compared to loans kept at or below 80% LTV.

When private mortgage insurance (PMI) was tax-deductible (from around 2006 through 2016), many borrowers opted for a single home loan instead of tacking on a “piggyback” second mortgage because of the perceived savings.

In short, PMI is required for any single home loan over 80% loan-to-value, though it can be avoided if you structure a combo loan, keeping the first mortgage at 80% LTV, while putting the remainder of the balance on a second mortgage.

Put simply, if a homeowner breaks up their mortgage into two separate loans, even with two completely different banks, they can avoid paying PMI. On top of that, they can also enjoy a lower blended rate than simply going with one loan at say 90-100% LTV.

However, you have to take into consideration the closing costs and mortgage rate of that second mortgage. So, which method makes better sense for you? Let’s look at some of the pros and cons of each. 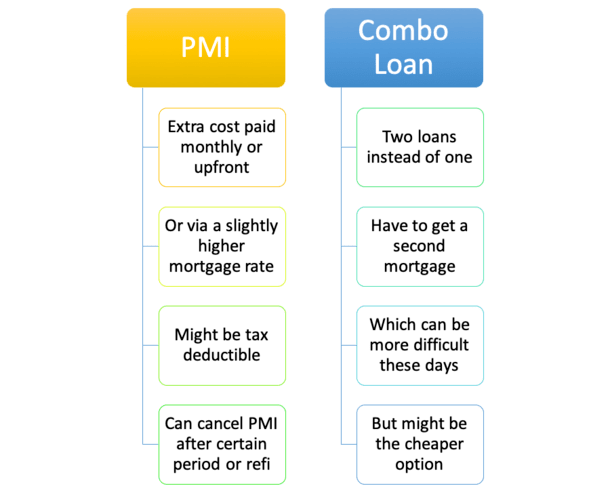 The most obvious benefit of utilizing a mortgage combo is that you can avoid paying mortgage insurance each month.

By breaking the loan amount up into two loans, you can circumvent the mortgage insurance requirement, which in turn can save you hundreds of dollars a month depending on the cost.

Together, it is 90% combined-loan-to-value (CLTV), but since the first mortgage stays at 80%, PMI is not required.

Now let’s look at an example to illustrate the combo loan in action.

Hypothetically speaking, a borrower could finance one loan at 90% LTV at an interest rate of 8% and pay PMI.

Often, these second mortgages are HELOCs, which are actually lines of credit you can draw upon.

If we blend the two mortgage rates together, we come up with a combined rate of 6.778%. This is a considerable savings compared to 8% for a single loan that also requires PMI.

More often than not, a blended rate can save you money. While a rate of 9% may seem high, the second mortgage is only ten percent of the purchase price or appraised value, so the blended rate is quite a bit lower.

The saving grace to second mortgages is that they tend to be small, which means the monthly payments are still quite low comparatively, even if the interest rate isn’t.

That’s considerably cheaper than the 8% interest rate you’d get with a single loan, and that’s without even factoring in mortgage insurance.

Check out my blended rate calculator to determine if two loans price out better than one.

Some banks and lenders don’t allow LTVs over 80% period, so anyone financing more than 80% LTV will need to take out two loans or look elsewhere.

And while you might be able to get a single loan up to 97% LTV, a combo loan may be required to finance up to 100% of the purchase price.

In addition, you might be able to keep your first loan under the conforming loan limit, which will allow you to receive more favorable pricing relative to a jumbo mortgage, while also avoiding PMI.

This means you can play around with interest rates to find a blended rate that suits your situation best. You can also put less money down and get a more expensive home without the need for mortgage insurance.

There are situations where a second mortgage rate can be as high as 12%, which is a pretty nasty interest rate.

If you elect to stick to one loan with mortgage insurance, rates will be more reasonable, often not exceeding 6% for average to good credit borrowers.

Along with a lower interest rate, you’ll also avoid fees that come with second mortgages, such as underwriting, doc drawing, origination fee, and anything else a broker or mortgage lender may charge you.

And you won’t need to worry about a prepayment penalty or early closure fee that second mortgages often carry.

Sometimes breaking up the mortgage into two separate loans can be a lot more work, especially if the loans are being handled by two different banks.

It’s not unusual for a bank to originate your first mortgage and have the second outsourced to another bank.

This can make things difficult if the two banks are not in sync, and can often create twice the amount of work, and subsequent headaches.

Also consider post-closing, when you’ll need to make out two separate checks each month for the first and second mortgage.

And if you’re ever late, you may be hit with two mortgage lates instead of just one, which could make future financing extremely difficult.

Mortgage Insurance Can Be Temporary

While mortgage insurance does increase your mortgage payment each month, it does so only until your mortgage balance reaches 78% of the original purchase price of your home. At that point, PMI is automatically canceled by the lender.

And if your loan-to-value reaches 80%, you can initiate the cancellation yourself even earlier by asking your lender to remove it.

So if you decide to finance a single loan at 85%, it may only take a few years to eliminate the need for PMI and lower your monthly housing payment.

It’s also possible to refinance and ditch the PMI if home prices have risen enough since origination to get your LTV down below 80%.

For about a decade, PMI was tax deductible after a bill was passed by Congress in December 2006. However, it required approval to remain in place for subsequent years.

During those years, PMI was fully tax-deductible for borrowers if their adjusted gross household income was $100,000 or less. The amount you could write off was then incrementally lower as your household income increased.

Clearly this made PMI more attractive, but like all tax write-offs, it’s often better not to pay anything to begin with.

Receiving a share of the money back is great, if you must pay it, but not having to pay it at all is even better.

But don’t bank on it being as advantageous thanks to other tax changes like a higher standard deduction.

So Which Option Is Better?

PMI companies highlight the fact that mortgage insurance is predictable, affordable, and cancelable.

They also say that second mortgages are often adjustable-rate mortgages and that you’re stuck with the loan until you pay it off.

You can argue for or against PMI and combo loans, but the only way to decide what’s best for you is to do the math. You really need to shop around and crunch the numbers to see which scenario makes more sense for you.

There will be cases when each is more attractive based on a variety of factors including loan amount, down payment, transaction type, credit score, income tax bracket, and much more.

You also need to consider how long you’ll be in the property, and what you plan to do with the home.

Be sure to factor in home prices in your area, and whether they are appreciating or dropping.

If prices are on the rise, you may reach that 80% loan-to-value mark quickly and you’ll be free of PMI with only one loan to worry about. If prices drop, you could be stuck with PMI for years to come.

If you don’t like the idea of PMI or a second mortgage, there are always products like the Bank of America No Fee Mortgage, which promises no mortgage insurance even if your loan exceeds 80% loan-to-value.

Similar loan programs are out there as well, and while they don’t explicitly charge PMI, it is typically passed along to the homeowner via a higher mortgage rate.