It’s Not Cheaper to Own Than Rent? What!

If you ask just about anyone, they’ll probably tell you it’s better to own a home than rent.

You’ll most likely hear the age-old line, “Renting is just throwing money away!”

It’s a sound argument on the surface, so long as you don’t dig into the details. Someone who owns accrues equity in the property, whereas the renter gets nothing over the years.

Of course, that’s the very simplified version. If you break it down, the renter might pay less each month and put their excess cash to work elsewhere, perhaps in equities, bonds, etc.

But forget about all that. Just consider the assumptions most rent vs. buy calculators make, according to a 2015 analysis from John Burns Consulting manager Erik Franks.

Franks notes that one “highly publicized calculation” available online bases the comparison on a 20% down payment.

Unfortunately, many prospective (and eventual) home buyers don’t actually put 20% down. Instead, they might only put down 10%, 5%, 3.5% (in the case of FHA), or even as little as 3% thanks to the new Fannie/Freddie guidelines.

Clearly we can’t assume all buyers will put down 20% anymore, it’s just not today’s reality.

The second outdated assumption has to do with taxes. The calculator in question puts buyers in the 25% tax bracket, meaning they’ll save 25% on interest and real estate taxes paid.

But Franks says half of today’s buyers obtain a mortgage less than the median resale price of $236,000. And because the entire amount of interest on such a mortgage is below the standard itemized deduction, he believes many entry-level buyers receive no tax benefit whatsoever.

Of those who do itemize, the savings may only amount to some small portion of what the calculator may claim.

The final assumption is that future home price appreciation should be included in the decision. Franks questions this, pointing to a 1-2% annual rate of appreciation during a 30-year period of falling mortgage rates.

With rates expected to rise, or at best remain flat, he believes that rate of appreciation could be an “aggressive assumption.”

Of course, there’s no clear correlation between mortgage rates and home prices, so you can’t really argue that one either way with any certainty.

He does note that homeownership is a “great long-term investment,” but just wants people to know it’s not necessarily cheaper than renting. And concludes that if owning were truly cheaper, more people would be buying homes. 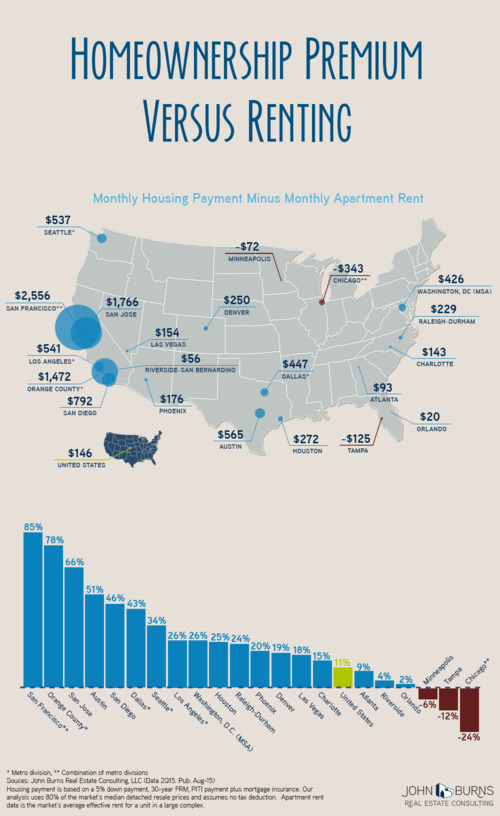 Above is a chart of the “homeownership premium” versus renting in major markets throughout the country.

Instead of assuming a 20% down payment, they assume buying a home valued at 80% of the median home price with just five percent down (95% LTV). This is apparently a reasonable assumption for a first-time home buyer.

As you can see, it’s more expensive to own basically everywhere except for Chicago, Minneapolis, and Tampa.

However, as Franks points out, an owned home is “usually much nicer” than a rental, and as a result, will cost you more.

Read more: Why are mortgages cheaper than rent?

1 thought on “It’s Not Cheaper to Own Than Rent? What!”