While the good news about housing keeps flooding in, one piece of negative data jumped out at me today.

The latest Zillow Negative Equity Report released today revealed that nearly one out of every five (18.6%) Las Vegas homeowners with a mortgage owed double what their home was worth as of the end of the fourth quarter.

For most people, this would signal being past the point of no return. After all, most of us have enough trouble paying off a mortgage when we’re above water, so the thought of owing double is daunting, even with a kick-butt mortgage rate.

Of course, if you stick around long enough, home price appreciation should do some of the heavy lifting, but it’s still a big ask for struggling homeowners.

While I cherry-picked a bad piece of data, it should be noted that 26.7% of Vegas homeowners were in this position one year earlier, so it’s not nearly as bad as it was.

And only 8.9% of underwater homeowners are delinquent on their mortgage payments, down from 9.9% a year earlier.

So yes, things are getting better…at the same time, the 200%+ loan-to-value (LTV) ratio bracket was the most prominent in Sin City. 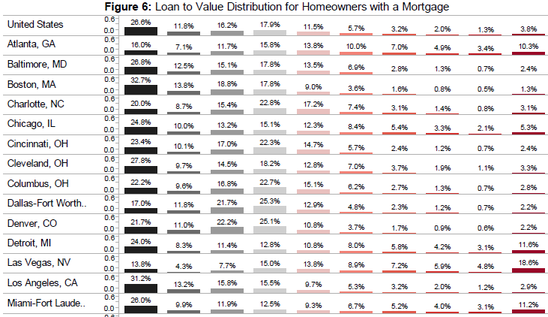 In other words, if you went door to door and asked Vegas homeowners with mortgages what their LTV was, most would say 200%+.

3.8% of American Mortgagors Owe More Than Double Home’s Worth

If we expand the data to the whole of the United States, 3.8% of Americans with mortgages owed more than double what their homes were worth at the end of 2012.

That’s pretty scary, though the majority of U.S. homeowners with mortgages (26.6%) have LTV ratios south of 40%.

And 72.5% have a LTV somewhere below 100%, meaning they’re not the proud owners of an underwater mortgage.

If you look at the graphic below, you’ll notice that the LTV distribution is improving in every category, thanks to continued home price appreciation. 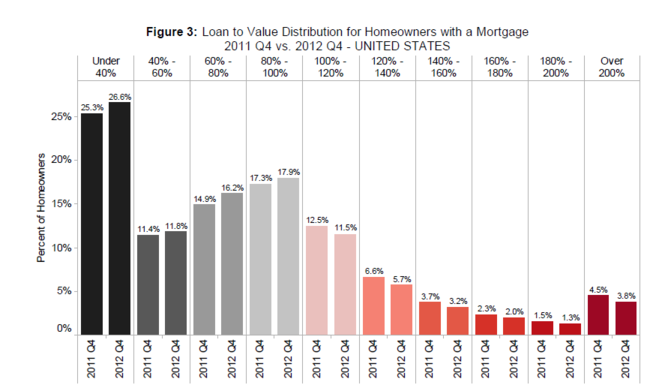 As a result, nearly two million homeowners were able to get below the 100% LTV mark in 2012, though 13.8 million remain underwater.

Still, roughly one-third of all homeowners own their homes free and clear because they don’t have a mortgage. 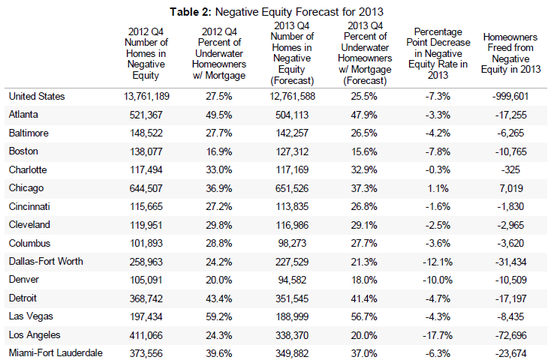 Zillow also has a nice little chart detailing how many homeowners will be “freed from negative equity” in 2013.

Using this data, we can guess which metros will see an increase in housing inventory, as that many more borrowers will finally be able to list their homes and move on to greener pastures.

The company expects 72,696 homeowners in Los Angeles to get above water in 2013, making it the leading metro in terms of total numbers.

Nearby Riverside is expected to “free” 62,407 homeowners, which represents a 21.2% decrease in the negative equity rate there, the second largest percentage decrease behind Sacramento (-21.3%).

In hard-hit Vegas, only 8,435 homeowners are expected to get above water this year, which represents just a 4.3% decline in negative equity.

And in Chicago, negative equity is actually forecast to get worse, with 7,019 more homeowners going under in 2013.

This all reminds me of a post I wrote back in 2010, which claimed some real estate markets wouldn’t see a return to peak home prices until 2039.

In other words, while there is plenty of good news, it’s going to take a while to undo this mess.

Read more: How to refinance with negative equity.