A pair of sweeping mortgage rules is expected to eliminate roughly 60% of today’s mortgages, according to a new analysis from CoreLogic.

The so-called Qualified Mortgage (QM) and Qualified Residential Mortgage (QRM) rules come with a ton of restrictions to ensure borrowers actually qualify for the mortgages they take out.

In exchange for meeting these more stringent underwriting guidelines, banks and lenders will be afforded certain protections (and less regulation), making them more willing to originate such loans.

And while the QRM rules are not yet finalized (only QM), is it widely anticipated that in order to qualify for such a loan, a hefty 10% down payment will be necessary.

In short, these types of loans will be the safest and most valuable to originate, and thus lenders will offer the most competitive mortgage rates, similar to today’s conforming loans.

Who Will Be Left Out by QM and QRM? 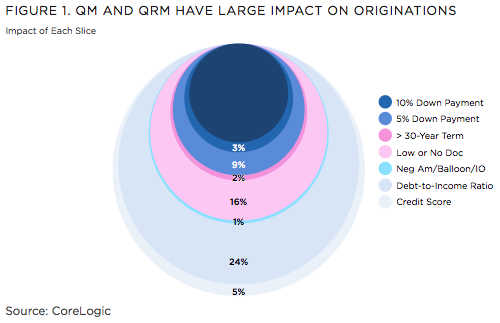 An analysis of 2.2 million loans originated during 2010 revealed that 24% of borrowers wouldn’t qualify based on the back-end debt-to-income (DTI) requirement of 43%.

In other words, if your mortgage payment and all other monthly liabilities exceed 43% of your gross monthly income, you wouldn’t qualify based on the new rules.

That could mean a higher mortgage rate, and/or a more difficult time finding a loan.

The second largest category of borrowers that would be left out would be the low and no doc applicants, which removes another 16%.

In short, if you can’t go full doc in the future, and actually prove you have the ability to repay your mortgage, you’ll have a tougher time getting a mortgage.

The remaining QM rules only eliminate another 8% of today’s mortgages, including minimum credit score (5%), loan amortization longer than 30 years (2%), and neg-am/balloon/interest-only loans (1%).

If you factor in the 10% down payment requirement that is expected on QRM loans, another 12% of borrowers would have to find a non-QRM loan.

Again, if you have to go that route, it’s likely your mortgage rate will be higher and harder to come by.

More than 90% of Mortgage Risk Removed 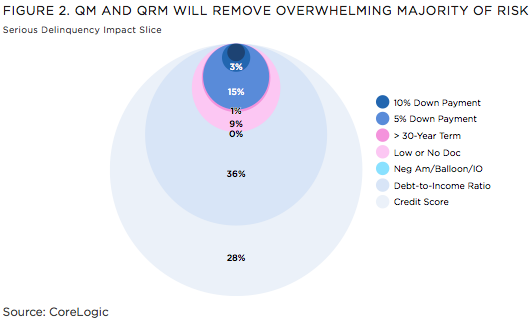 While it sounds like the government is “going too far,” note that the rules could eliminate more than 90% of serious mortgage delinquencies, leading to a much healthier housing market.

In fact, the DTI rule alone stamps out 36% of all serious delinquencies, while a minimum credit score of 640 would get rid of another 28% of late payments.

Additionally, the 10% down payment requirement would reduce serious delinquencies by 18%.

Those liar loans and 40-year loans would further reduce delinquencies, with an aggregate 92% of risk removed from the mortgage market. Not too shabby.

Of course, there are still some pretty big exemptions to the new rules.

First off, loans approved by the automated underwriting systems of Fannie, Freddie, the FHA, and the VA are exempt from the new rules for a seven-year transition period.

And loans backed by the GSEs and FHA/VA currently enjoy a 90% market share. In other words, a whole lot of nothing might happen over the next many years.

However, if Fannie and Freddie were to come out of conservatorship, the exemption would no longer apply to them.

Additionally, HELOCs are exempt from the QM rules, and loans kept on lender’s books (portfolio lenders) aren’t subject to the QRM rules.

CoreLogic also pointed out that cash buyers aren’t at all affected, which means there will still be plenty of volatility in the housing market.

Couple that with the fact that the mortgage industry is perhaps the most well versed at adapting to new rules, and we could be just years away from repeating the same mistakes seen during the past crisis.