The Good News and Bad News About Underwater Homeowners

An interesting report was released today by Zillow, which noted that despite recent home price gains, underwater homeowners still collectively owe more than $1.2 trillion more on their mortgages than their homes are worth.

That $1.2 trillion is shared by a staggering 16 million homeowners, which broken down is roughly $75,000 per household, according to the first quarter Zillow® Negative Equity Report.

Of course, the negative equity amount will be much higher in the hard-hit, expensive states, such as California, Arizona, and Florida.

Nearly One Third of Homeowners with Mortgages Underwater

And it has actually gotten worse. About 31.4% of homeowners with mortgages were underwater as of the end of the first quarter, a slight rise from the 31.1% seen a quarter earlier.

However, it is down a bit from the 32.4% seen a year ago. Still, shaving a mere 1% over the course of a year isn’t that impressive.

You also have to wonder if the numbers look even better thanks to underwater homeowners either walking away or being foreclosed on during that time. They’re no longer underwater…they’re just homeless.

But perhaps the scariest figure in the report is that more than a quarter (26.8%) of homeowners with mortgages in the Las Vegas metro area owe double what their homes are currently worth. I guess no one really wins in that city.

While that all sounds pretty awful, Zillow Chief Economist Stan Humphries seems to be a little more upbeat.

He noted that despite the large number of underwater borrowers, nine out of 10 are still making their mortgage payments on time.

Additionally, he noted that the negative equity is essentially a “paper loss,” as it hasn’t been realized for most, and maybe never will, assuming they stick around and home prices turnaround.

To veer away from the good news for a moment, the average underwater homeowner in Las Vegas can expect their home equity in 2020 to be a paltry $1,039.

So in about eight years, Sin City residents will be rewarded with a sliver of breathing room. Of course, you still won’t be able to sell without a loss given real estate agent commissions and what not.

In Detroit, it’s even worse. Underwater homeowners there will still be, on average, $7,156 in the red by the next decade.

Okay, back to the good news. The majority of homeowners who are underwater are only just underwater.

That’s right; nearly 40% of underwater borrowers owe anywhere from one to 20 percent more than what their homes are currently worth, which obviously sounds very manageable, assuming they can stick it out.

However, an additional 20% owe between 21-40 percent more than what their homes are worth.

And 2.4 million homeowners still owe double what their homes are worth. It’s hard to imagine many of them getting back on track, even with programs like HARP 2.0 out there.

So as you can see, there’s plenty of good and bad news here, and depending on which way the economy goes, it could get a lot better, or a lot worse, exponentially. It’s also very regional.  Some areas of the country will take much longer to recover back to peak home prices than others.

The takeaway from all this is that those buying now have a huge head start versus existing borrowers, most of whom continue to make on-time payments. But with more downside risk ahead, it’s still a little murky. At least you’ll have a low mortgage rate…

Check out the map below to see the underwater carnage from sea to shining sea: 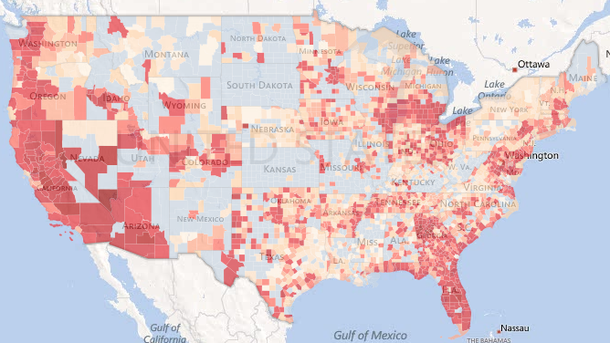