Over the past few years, mortgage rates have reached new all-time lows and haven’t strayed too far from such levels, despite some upticks here and there.

As a result, everyone and their grandmother has refinanced to take advantage of the situation. In fact, many have been able to reduce their already-low interest rates several percentage points.

At the same time, the push to shorten mortgage terms has proven successful. During the third quarter, a whopping 37% of borrowers shortened their loan term while refinancing, according to the latest quarterly refinance report from Freddie Mac released today. 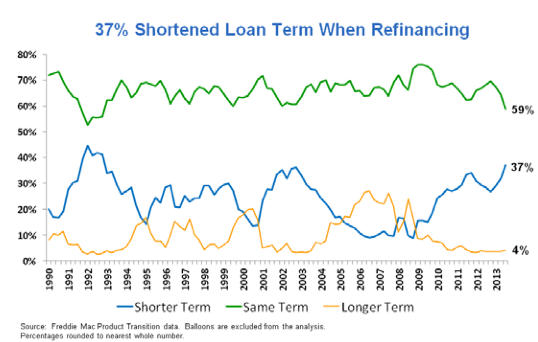 So just to great this straight, borrowers are snagging interest rates at levels never seen before, and they’re opting to pay off their mortgages in half the time with 15-year fixed mortgages.

Heck, mortgage lenders are even touting 10-year fixed mortgages on TV these days (because the rate is lower and seemingly more attractive).

Not only that, but everyone is going with a fixed-rate mortgage as opposed to an ARM, with more than 95% of refinancing borrowers choosing a FRM during the third quarter.

Anyway, thanks to these very favorable conditions, just about everyone who could refinance did, and even those who historically could not (underwater borrowers) were able to take part thanks to HARP.

Make Hay While the Sun Shines?

You can’t really blame anyone.  The environment has been ripe for refinancing.  While this is great news for homeowners and the housing market in general, there has to be a loser, right? No, I’m not talking about the Fed’s balance sheet.

Sure, mortgage brokers and loan officers have probably made a killing over the past several years, but now banks and mortgage lenders are coming to terms with the slowdown and shedding jobs like crazy.

Put simply, the future doesn’t look very bright for those in the industry, and that’s not just speculation.

Freddie Mac noted in its refinance report that mortgage rates have remained below 5% for much of the past four years, meaning few borrowers who took out loans during this time will have an incentive to refinance in the future.

As a result, the median age of the original loan before refinance increased to 6.7 years during the third quarter, the oldest since analysis began back in 1985. 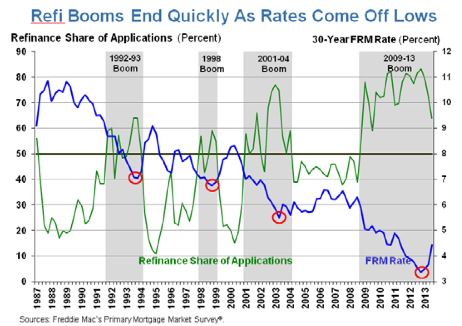 This chart won’t go any lower, so the next refinance boom is hard to imagine.

So today’s mortgages are practically unrefinancible. No, that’s not really a word, but it might be soon.

How is today’s homeowner with a 15-year fixed mortgage set at 2.75% going to do any better? Or the borrower with a 30-year fixed at 3.5%? These loans aren’t going to be refinanced unless someone really, really needs cash.

The only hope for an uptick in volume is via home equity lines (that don’t disrupt the first mortgage) or a return to subprime lending.

Sadly, this means the mortgage industry isn’t going to “knock the cover off the ball” anytime soon.

Yes, there’s talk of the purchase money mortgage market steadily improving as home prices rise and more borrowers list their homes. But it won’t be enough to stop the bleeding.

The MBA expects mortgage volume to sink 32% in 2014, with $1.2 trillion in total production. I wouldn’t be surprised if the numbers came in short.

To make matters even worse, a lot of individuals seem to be numb to the low rates still on offer. Just imagine how high a 6% mortgage rate will look to these people.

The good news is that those who refinanced during the third quarter will save approximately $6 billion in interest over the next 12 months.

previousBeware: Your Adjustable-Rate Mortgage May Reset Lower
nextKeep Your Home California Now Considers LTV of 140% or Higher a Financial Hardship