Washington Mutual Shut Down by OTS 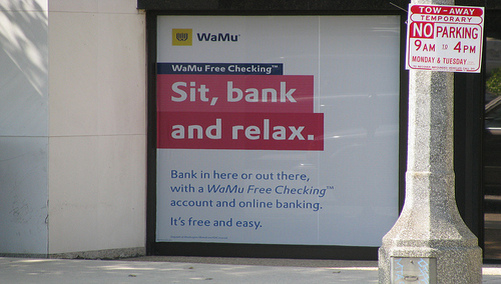 So much for the merger with Chase; instead the largest bank failure in U.S. history.

Late Thursday evening, Washington Mutual was shut down by the Office of Thrift Supervision (OTS) and the FDIC was named receiver, making it the 13th failure of the year.

At the same time, JP Morgan Chase acquired the assets of the failed thrift for $1.9 billion, essentially protecting both the bank and the FDIC from a run on deposits that could have been much more spectacular than the Indymac bank run.

The OTS noted that depositors had pulled out $16.7 billion in deposits since September 15, essentially sapping liquidity and leading to the bank’s collapse.

FDIC Chairman Sheila C. Bair said the move is “simply a combination of two banks,” and that it will be business as usual come Friday morning.

However, it’s not business as usual for shareholders, who will likely be wiped out when the company files for bankruptcy protection.

But ultimately none of the above seemed interested in acquiring the Seattle-based bank’s toxic portfolio of mortgages, many of which are default-prone option-arms.

It’s been a tough year for WaMu, who halted wholesale lending, shut much of its retail mortgage operation, and raised $7 billion from TPG as record losses took their toll on the bank.

Just over a week ago, the bank and mortgage lender said its capital levels were well above requirements for “well capitalized” institutions.

What’s the downside to buying a struggling mortgage lender on the cheap? Well, among other things, cleaning up their dirty past.

Bank of America just pledged $8.4 billion in aid to former Countrywide borrowers, and now it looks as if Chase may have to do the same.

The suit claims WaMu’s shady practices caused scores of California residents to lose or be in jeopardy of losing their homes as a result of foreclosure.

Among the charges, it alleges WaMu made loans without consideration or verification of a borrower’s ability to repay the loan, colluded with appraisers to inflate home values, induced borrowers to serially refinance their mortgages, and committed fraud to conceal the nature of a loan obligation.

The lawsuit is seeking to enjoin WaMu from initiating or advancing foreclosures on any owner-occupied residential mortgages involving subprime mortgages (both ARMs or fixed-rate mortgages), and also option arms, until workout or relocation measures have been taken.

“Countrywide has seen the light and now it is WaMu’s turn to demonstrate that they are a good corporate citizen,” City Attorney Aguirre said in a statement.

Back in late July, the city of San Diego filed a lawsuit against defunct mortgage lender Countrywide Financial for similar offenses.

Home loans originated in California accounted for half of WaMu’s mortgage portfolio by the end of 2007, according to a company filing cited in the lawsuit.