It’s not uncommon for homeowners to take out a home equity line of credit (HELOC) behind their first mortgage to pay for home renovations or to pay off other high interest rate debt.

Or simply to take one out as a second mortgage to get the financing they need to purchase a home.

But the way HELOCs are currently structured, homeowners have a tendency to get into a lot of trouble, especially if monthly payments rise significantly after the initial 10-year draw period.

These days, most HELOCs allow for a 10-year interest-only period, followed by a 10- or 15-year repayment period.

In other words, homeowners can make interest-only payments for a decade before actually paying back any of the money they borrow.

Once the draw period ends, they must begin paying back all the debt over a shorter term (not 30 years), which will result in much higher payments. 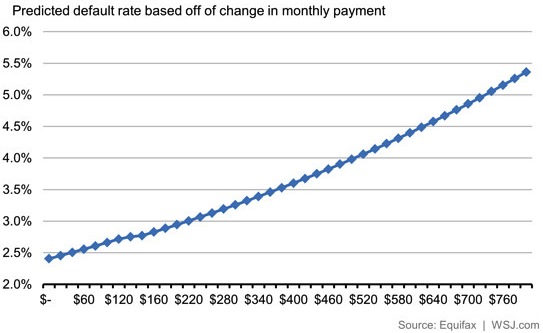 That payment jumps up to over $175 a month once you’re required to make the full principal and interest payment and pay it off in just 15 years. And that’s assuming the prime rate remains at a super low 3.25%.

If interest rates rise during the draw period, which they probably will, the payment shock will be even greater. Many of these products don’t have any periodic interest rate caps in place, just a max interest rate of say 18%.

Clearly this is a problem, especially if homeowners take out of these HELOCs when home prices are inflated, which many did during the past boom years.

In 2004, HELOCs outstanding increased 42%, so many of these products have now switched over to the fully amortized payment. These so-called resets pose a threat to the ongoing housing recovery, and many more are expected in 2015, 2016, and so on.

And with home prices still not back to peak levels, many of these homeowners are still in underwater positions, meaning their motivation to make a higher payment each month might be quite low.  Hello default.

To combat the possible repercussions of these nasty resets, Wells Fargo is getting rid of the interest-only option on its HELOCs.

Wells Fargo Home Mortgage Executive Vice President Brad Blackwell told the WSJ that “it’s the right thing to do for our customers,” and that they want to the lead the industry toward a “more responsible” product.

Additionally, he said they wanted to “fix a flaw in the product” that allowed monthly payments to rise significantly. Clearly this is also bad for Wells Fargo, which happens to hold billions in home equity debt.

So the move should help the bank as well. It also aligns with the new Qualified Mortgage rule, which banned interest-only first mortgages.

Lenders are still allowed to offer an IO option on home equity lines, and they probably will continue to do so because of the harsher rules on first mortgages. Consider it a loophole.

For the record, Wells will continue offering an interest-only option on HELOCs to wealthy customers who can handle any and all payment increases without batting an eye.

In the meantime, they still have to contend with $28 billion in HELOC resets from now through 2017. The bank noted that it reaches out to borrowers facing a reset to lessen the blow of a payment increase.

The San Francisco-based bank accounted for about 14% of all home-equity lending in 2013, making it the nation’s largest first and second mortgage lender.

previousAlmost Half of Recent Home Purchases Required Mortgage Insurance
nextIf You Can’t Pay the Mortgage, Live in Your Awesome Garage