At first glance, they look to be pretty lackluster, and the CFPB seems to be asking more questions than it is giving answers.

As part of Dodd-Frank reform arising out of the latest mortgage crisis, lenders must now ensure that borrowers have the ability to repay their mortgages.

While this sounds like a no-brainer, prior to the crisis just about anyone with a pulse could take out a home loan.

The CFPB included the story of a victimized borrower in its press release, though you have to wonder how many of these homeowners actually knew they couldn’t afford the loans before agreeing to apply for one.

Sure, it went both ways, but it was both lenders and borrowers who were at fault for the crisis.

The new “Ability-to-Repay rule” requires lenders to underwrite pretty much ALL new residential home loans a lot more stringently than in past years, namely the 2000s.

However, the new mortgage rules are pretty much on par with today’s underwriting standards, which have become much more rigorous in light of past abuses.

I say pretty much all because HELOCs, time-share plans, reverse mortgages, bridge loans, and certain construction-to-perm loans are exempt from the ATR rule.

As part of the ATR rule, lenders must consider and verify eight (8) underwriting criteria:

So basically underwriters need to do their due diligence, which has always been the case.

There is nothing groundbreaking here, just basic underwriting at its purest and best, including verifying that borrowers have sufficient income and assets to take out a sizable home loan.

This means no stated income loans or no doc loans, which were prevalent during the housing boom.

Additionally, lenders can’t use teaser rates to qualify borrowers; only the full principal and interest payment will suffice.

However, if a borrower is being refinanced out of a high-risk loan, such as an ARM, interest-only loan, or option arm, into a more stable loan, the full underwriting process is not necessary.

Certain federal refinancing programs such as HARP 2 will also be exempt from these rules.

What Is a Qualified Mortgage? 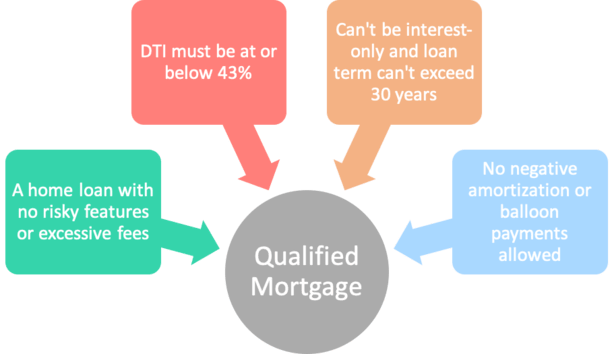 The CFPB also released its definition of a “qualified mortgage,” which is presumed to meet the ATR rule requirements as well, and provide the most protection to borrowers (and more importantly, lenders).

Qualified mortgages have even more mandatory features, including the following:

For a transitional period (seven years), the DTI limit will not be enforced if the loans are eligible for purchase by Fannie Mae, Freddie Mac, or the FHA.

So in essence, the DTI limit won’t really be an issue for most loans, seeing that the majority are sold to Fannie or Freddie.

*The FHA Qualified Mortgage definition is pretty much the same as Fannie and Freddie’s, except for the APR thresholds, which are detailed below.

Here is a look at the max points and fees for Qualified Mortgages, currently capped at 3% of the loan amount if $100,000 or higher, and a proposal made by the Mortgage Bankers Association to increase them for smaller loan amounts:

Note that many third-party fees for things like title insurance, escrow, appraisal and credit reports aren’t part of the fee calculation (unless they come from a creditor affiliate, the creditor receives compensation, or the fees are deemed unreasonable).

Additionally, discount points may be limited based on the loan’s APR relative to the average prime rate offer (APOR).

It’s all very confusing at the moment, so hopefully over time some of these issues will be clarified.

This category of QMs covers “higher-priced loans” reserved for borrowers with insufficient or poor credit history. These loans are distinguished as those with APR more than 150 basis points (1.5%) above the “Average Prime Offer Rate” (APOR) benchmark.

Assuming the loan finds its way into default, the borrower can “rebut the presumption” that the lender actually considered their ability to repay the loan.

The CFPB notes that the borrower would have to prove that the lender didn’t consider their other living expenses after the mortgage and other debts were accounted for.

The second category of QMs is reserved for lower-priced loans made to borrowers who present little risk. These loans are defined as those with APR less than or equal to 150 basis points (1.5%) above the APOR benchmark.

Lenders will be assumed to have “legally satisfied” ATR requirements, meaning they won’t be on the hook for the loan if it goes bad.

However, borrowers can still challenge the lender if they believe the loan fails to meet the rules of a QM.

In both categories, borrowers also have the right to challenge lenders for violating any other federal protection laws.

The CFPB is also seeking public comment for a number of other proposals, including whether there should be exemptions for non-profit creditors and housing finance agencies promoting affordable housing and community development (grey area).

Exemptions are also being floated for homeownership stabilization programs intended to prevent foreclosures, such as the Making Home Affordable initiative.

Additionally, community banks and smaller credit unions that originate and hold loans in their own portfolios could be given QM status.

Finally, the CFPB wants advice on how best to calculate the loan origination compensation rules, including specific limits on mortgage points and fees.

All said, there are plenty of unanswered questions here, and much of it sounds like the same nonsense all over again. The type of rule making that is circumvented before it’s even written.

Still, it will be interesting to see if “QM loan” becomes a household name, and makes non-QM loans much more expensive.

The Ability-to-Repay rule and proposed amendments are expected to go into effect in January 2014.