What Is a Mortgagee? Hint: It’s Not a Typo Nor Is It Misspelled

Are You a Mortgagee or Mortgagor?

It’s mortgage Q&A time! Today’s question: “What is a mortgagee?”

No, it’s not a typo. I didn’t leave an extra “e” on the word mortgage by mistake, though it may appear that way.

Despite its striking appearance, it’s actually a completely different word, somehow, simply with the mere addition of the letter E.

Don’t ask me how or why, I don’t claim to be an expert in word origins.

Seems like a good way to confuse a lot of people though, and it has probably been successful in that department for years now.

You can blame the British English language for that, or maybe American English.

Anyway, let’s stop beating up on the English language and define the darn thing, shall we.

A “mortgagee” is the entity that originates (makes) and sometimes holds the mortgage, otherwise known as the bank or the mortgage lender.

They lend money so individuals like you and I can purchase real estate without draining our bank accounts.

It could also be your loan servicer, the entity that sends you a mortgage bill each month, and perhaps an escrow analysis each year if your loan has impounds.

The mortgagee extends financing to the “mortgagor,” who is the homeowner or borrower in the transaction.

So if you’re reading this and you aren’t a bank, you are the mortgagor. It’s as simple as that.

Another way to remember this rather confusing word jumble; Who is the mortgagee? Not me!!

Mortgagor Rhymes with Borrower, Kind Of 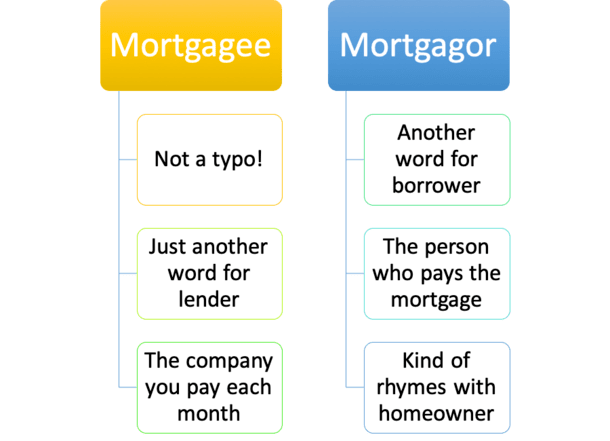 I was trying to think of a good association so homeowners can remember which one they are, instead of having to look it up every time they come across the word.

I believe I came up with a semi-decent, not great one. Mortgagor rhymes with borrower, kind of. Right? Not really, but they look and end similar, no?

Anyway, the real property (real estate) acts as collateral for the mortgage, and the mortgagee obtains a security interest in exchange for providing financing (a home loan) to the mortgagor.

If the mortgagor doesn’t make their mortgage payments as agreed, the mortgagee has the right to take possession of the property in question, typically through a process we’ve all at least heard of called foreclosure.

Assuming that happens, the property can eventually be sold by the mortgage lender to a third party to pay off any attached liens, or mortgages.

So if you’re still not sure, you are probably the mortgagor, also known as the homeowner with a mortgage. And your lender is the mortgagee. Yippee!

What makes this particular issue even more confusing is that it’s the other way around when it comes to related words like renters and landlords.

Yep, for some reason a landlord is known as a “lessor,” whereas the renter/tenant is known as the “lessee.” In other words, it’s the exact opposite for renters than it is for homeowners.

But I suppose it makes sense that both landlord and mortgage borrower are property owners.

What About a Mortgagee Clause? 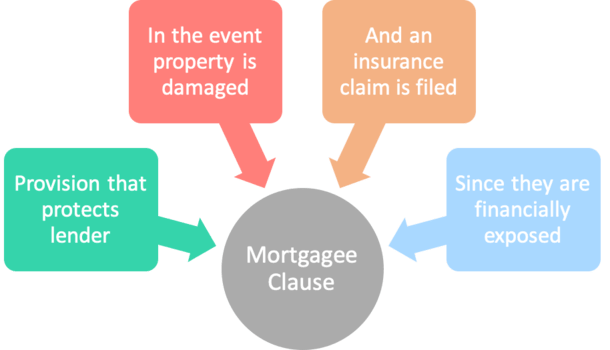 You may have also heard the term “mortgagee clause” when going through the home loan process.

It refers to a document that protects the lender’s interest in the property in the event of any damage or loss.

It contains important information about the mortgagee/lender, including name, address, etc. so the homeowners insurance company knows exactly who has ownership in the event of a claim.

Remember, while you are technically the homeowner, the bank probably still has quite a bit of exposure to your property if you put down a small down payment.

For example, if you come in with just a 3% down payment, and the bank grants you a mortgage for 97% of the home’s value, they are a lot more exposed than you are.

This is why hazard insurance is required when you take out a mortgage, to protect the lender if something bad happens to the property.

Conversely, if you buy a home with cash, as opposed to taking advantage of the low mortgage rates on offer, it’s your choice to insure it or not.

But more than likely, you’ll want insurance coverage on your property regardless.