A 30-Year Fixed Mortgage That Is Adjustable, Self-Refinancing, and Ideally Paid Off Early

Confused yet? Yeah, me too. Let’s dive in.

For a while now, the 30-year fixed-rate mortgage has been under attack. In short, opponents of the popular loan program argue that it builds equity far too slowly and requires government support to even exist, what with that interest rate locked in for three decades.

They’re right. It’s true that mortgage payments on the traditional 30-year fixed are mostly interest, especially during the first decade and change.

Very little of the principal balance is paid off, even though the borrower is making fully-amortized mortgage payments month after month.

This explains why homeowners can get into trouble even if they’re doing the right thing – if home prices fall and the borrower has only accrued a small amount of equity, they can easily find themselves in an underwater mortgage position.

Say what? A pair of researchers at the Federal Reserve, Wayne Passmore and Alexander H. von Hafften, have come up with an alternative known as a “Fixed-COFI mortgage.”

In their working paper titled, “Improving the 30-Year Fixed- Rate Mortgage,” they argue that the 30-year fixed is “flawed” for three main reasons.

First, equity accumulation is very low during the first decade of the loan, which they equate to essentially renting the home from a lender. This goes hand in hand with requiring a sizable down payment at the outset to mitigate risk.

Second, each mortgage payment on a standard 30-year fixed has built-in compensation to capital markets investors in exchange for the ability to prepay the mortgage.

In other words, borrowers are taking on higher mortgage rates in exchange for the option to freely refinance should rates fall. This is why the 30-year fixed costs more than say a 5/1 ARM.

Lastly, they argue that refinancing a mortgage is “often very costly,” noting that two percentage points are added to the outstanding mortgage balance to cover associated closing costs. 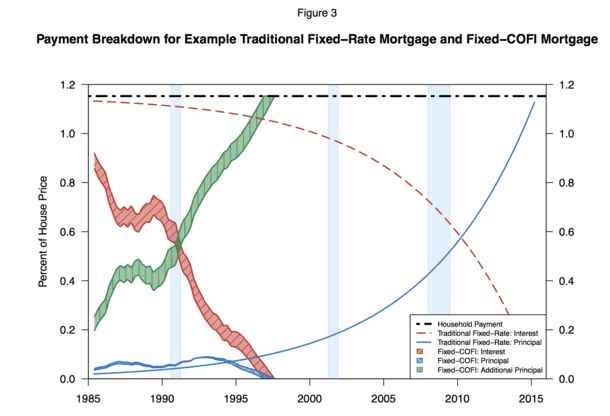 It gets pretty wonky, but the gist of it is that the borrower’s monthly payments are fixed for the life of the loan, just like a 30-year fixed. The loan is also guaranteed to be paid off in 30 years or less.

However, the composition of each mortgage payment can change from month to month depending on the direction of the underlying Cost of Funds Index (COFI).

So if the COFI has gone down since the borrower took out a Fixed-COFI mortgage, more of their fixed payment would go toward the principal balance.

And if rates really go up, there may even be a shortfall. This is where the “home equity savings account” comes into play.

Any excess payments are placed into a so-called “home equity savings account” each month, for which the proceeds can be used to pay down the principal further or weather these high-interest-rate periods.

The margin on the loan (a standard component of an ARM) also includes an insurance premium of sorts for a payment shortfall that exhausts the home equity savings, along with a premium to ensure the loan is paid off in 30 years.

If it isn’t, that insurance kicks in and acts as balloon payment insurance to ensure the borrower doesn’t have to pay off any remaining balance.

To that end, it kind of works like an adjustable-rate mortgage, without the payment adjustment risk or the payment improvement if rates were to go down. Instead, any rate improvement translates to more equity accrual.

And the Fixed-COFI mortgage eliminates the need to refinance because if rates improve, the payment composition will too.

That means the loan term won’t get extended, nor will the borrower pull out cash and prolong the life of their loan (and thereby increase their risk of default).

In the figure above, we see the interest portion of the payment in red, the principal in blue, and the additional principal (from rate improvements) in green. You can see the exponential power of that extra principal.

Instead of merely lowering the borrower’s monthly payment, the difference in rate goes toward the principal balance and really puts a dent in the mortgage.

Mortgage Is Paid Off in About Half the Time 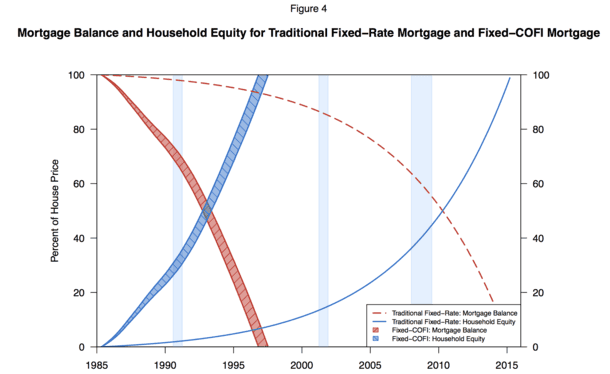 They ran some simulations, comparing the standard 30-year fixed to the Fixed-COFI mortgage, with an origination date of April 1985.

The Fixed-COFI mortgage winds up being paid off in full in just 13 years, by around 1998. The traditional 30-year fixed obviously has another 17 years to go, and won’t be paid off until 2015.

In this example, the “wedge” that the researchers say is “almost always present between traditional fixed-rate mortgage rates and COFI mortgage rates” is exploited.

It allows the Fixed-COFI mortgage to be paid down substantially faster, saving the homeowner roughly 250 percent of the home price.

In just five years, the homeowner owns between 22% and 27% of the home. After 10 years, homeowner equity rises to between 67% and 76%. This is attractive to lenders, and may even allow them to offer the program with zero down payment without increasing risk.

Meanwhile, the traditional 30-year fixed mortgage borrower only owns 1.8% of their home after five years, and just 5.3% after 10 years.

Of course, their modeling exploits a time period where mortgage rates basically marched right down from 14% to 7%. Not sure how it would work if rates were moving the other way. But there would be hedges in place (and that insurance) to protect lenders that offer the product.

It’s an interesting concept, though it would remove a lot of the churn from the mortgage market, which probably wouldn’t make originators very happy.

It also assumes homeowners want to pay off their mortgages early, something many might not want to do. Heck, not everyone wants to pay them down at all.