Are Low Credit Scores More Dangerous Than Low Down Payments?

Ever since Mel Watt hinted at the return of 3% down mortgages, there’s been a lot of worry that we could be headed down another dark path.

After all, it was a lack of skin in the game that caused all the carnage during the most recent housing crisis, right?

Well, maybe not. An analysis from the Urban Institute seems to put the blame more on low credit scores than low down payments.

They looked at Fannie Mae’s default rates for 30-year fixed mortgages before, during, and after the crisis to see what kind of impact ultra-low down payments had on mortgage performance.

Post-crisis, the defaults numbers are super low for both groups, and were in fact the same in 2011 at 0.4%.

What About Borrowers with Excellent Credit? 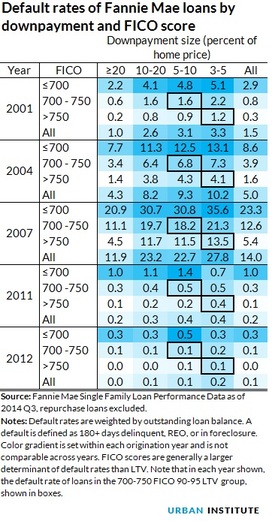 Interestingly, the numbers move a whole lot more when you throw credit score into the mix.

This trend can be seen throughout all the years in the analysis. In every instance (other than 2012) a lower credit score coupled with a higher down payment led to a higher default rate.

The more recent data doesn’t show much of a difference, but the data is pretty fresh and mortgage performance has been a lot better.

If you look at credit scores of 700 and below, the default rates skyrocket no matter what the borrower actually puts down. The upside is that they can sell and/or the bank won’t get stuck with an underwater mortgage.

Low Credit Scores Are Always Bad, Low Down Payments Can Be Bad

What seems to be clear is that a mere two-percent difference in down payment doesn’t lead to many more defaults in normal situations.

More importantly, a low credit score can result in some really ugly stuff, regardless of what’s going on in the market.

Obviously a combination of high credit score and high(er) down payment is best, as you can see from the data, but perhaps we shouldn’t freak out so much about low down payments.

My assumption is that credit scores are a pretty good way to determine if someone will make good on mortgage payments, whereas down payment-related performance tends to be dependent on what happens with home prices.

If home prices take a dive, those with little skin in the game will probably strategically default, but I’m not sure two percent would make a difference.

However, if home prices are steady or up, down payment size probably won’t come into play much, while a low credit score can certainly be a problem.

Put simply, low credit scores are always going to be an issue whereas low down payments can look bad in hindsight if and when home prices tank.

In other words, offering 3% down mortgages to creditworthy borrowers makes sense. Offering them to borrowers with terrible credit scores, FHA I’m looking in your direction, is the opposite of smart.