Though it may soon become easier to purchase a home with less money down, assuming 3% mortgages return as Mel Watt has promised, extracting existing home equity could become more difficult.

Yesterday, mortgage financier Fannie Mae released new guidelines related to cash-out refinances that limit how much equity a borrower can actually tap into.

For fixed-rate cash-out refinance transactions secured by one-unit primary residences, the maximum loan-to-value (and CLTV) will be lowered from 85% to 80%, effective December 13th.

Fannie Mae noted in the bulletin that it continually analyzes the profile of its mortgage acquisitions, particularly those that are high-risk, when making the change.

However, the company believes the adjustment will have a limited impact due to the small number of cash-out refis with such LTVs currently being originated and delivered to Fannie Mae.

For adjustable-rate mortgage (ARM) cash-out refis, the max LTV (and CLTV) will remain unchanged at 75%.

The max LTV limits for cash-out refinances on second homes and investment properties will also remain unchanged at 75% for fixed-rate mortgages and 65% for ARMs, and 70%/60% if the investment property is 2-4 units. 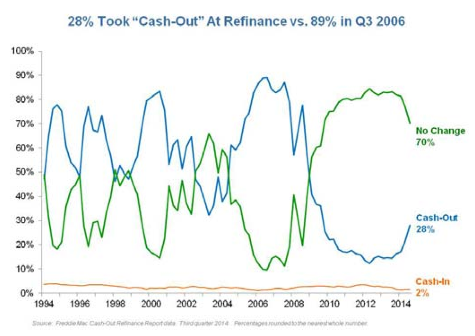 The timing of the change is interesting, given the fact that home prices have skyrocketed over the past year and change, and now appear to be slowing.

In some markets, home prices are actually down year-over-year. In fact, the National Association of Realtors reported last week that 47 metropolitan statistical areas (MSAs) recorded lower median prices during the third quarter from a year earlier.

That represents 27% of the 172 MSAs measured by NAR, which makes cash-out lending more risky in such markets.

If home prices decline, LTVs on the associated mortgages could rise and present more risk to investors.

Of course, the LTV limits are nowhere near as high as they were during the boom when lenders were happy to offer 100% financing, even with cash out.

That created a huge mess when property values declined and borrowers no longer felt like making their mortgage payments, especially when teaser rates on ARMs adjusted higher.

A study by Fed researcher Steven Laufer revealed that many homeowners who found themselves underwater actually purchased their homes at reasonable prices before the run-up.

And many would have had LTVs below 60%, but instead were forced to sell their homes short because they tended to apply for a cash-out refi once every three years.

Had lenders implemented a max LTV of 80% for cash-out loans, Laufer estimated that the amount of home equity extracted would have fallen by 23%, but the default rate would have been 28% lower.  So perhaps it’s a good thing Fannie is getting ahead of it this time around.

During the third quarter, an estimated $8 billion in home equity was cashed out via refinancing of conventional prime-credit home mortgages, up from $5.6 in the second quarter, per a recent Freddie Mac report.

While the numbers are up quite a bit, keep in mind that cash-out refinance volume peaked at $84 billion during the second quarter of 2006.

About 28% of borrowers took cash-out at the time of refinancing during the latest quarter, compared to 21% in Q2 and 14% a year earlier. The peak cash-out share was 89% in the second and third quarters of 2006.

previousAre Low Credit Scores More Dangerous Than Low Down Payments?
nextWatch Out for the Old ‘No Mortgage Payments for a Year’ Gimmick