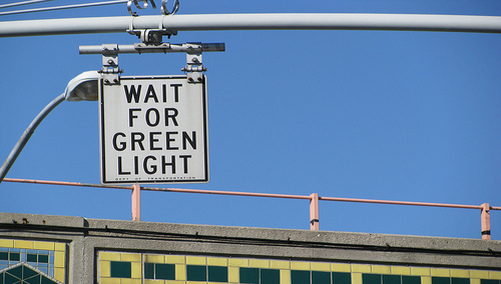 With all this talk about super low mortgage rates, it may sound like the perfect time to lock in a low rate on a new home purchase mortgage or a refinance.

But before you get pressured to lock it in, consider the fact that mortgage rates could fall even further in the near term.

At least, that’s what bond expert Bill Gross believes.  He told CNBC the 30-year fixed could fall another 50 to 100 basis points to as low as 4.5 percent.

Gross said flat out on television, “Don’t refinance yet.”

He noted that the government needs a 30-year rate between 4.5 percent and five percent in order to support slipping home prices, encourage refinancing, and get the economy back on track.

Of course that won’t apply to jumbo loans, which as the CNBC host aptly pointed out, won’t help Gross refinance his “double secret super jumbo” loan on his own multi-million dollar mansion.

Interest rates on conforming 30-year fixed-rate mortgages have already fallen to about 5.5 percent from six percent a week earlier, but jumbo loan rates still remain in the eight-percent range.

Last week, the Federal Reserve announced plans to buy up to $600 billion in GSE debt and mortgage-backed securities, leading to a substantial easing in interest rates.

But will it be enough for major homebuilders like Hovnanian, which back in November called on the government to lower interest rates to three percent to stimulate sales and make homeownership more affordable?

And what about all those underwater borrowers?