How Much Do Mortgage Brokers Make? No Salary Means The Sky Is the Limit

Mortgage Q&A: “How much do mortgage brokers make?”

If you happen to use a mortgage broker to obtain your mortgage, you may be wondering how they get paid and what they make.

Mortgage brokers essentially work as middlemen between borrowers and banks/lenders, so they can actually be paid by either party.

Just to be clear, this article is about how much mortgage brokers make on the home loans they originate, not how much they make in the way of salary.

Of course, brokers typically aren’t paid a salary, so if we know what they’re making per loan, we’ll have a decent idea as to what they might take home each year as well depending on annual volume.

But you have to consider their costs to operate as well, which will vary based on how large their shop is, if they employ loan officers, how much they spend on advertising (if any), and so on.

How Does a Mortgage Broker Get Paid? 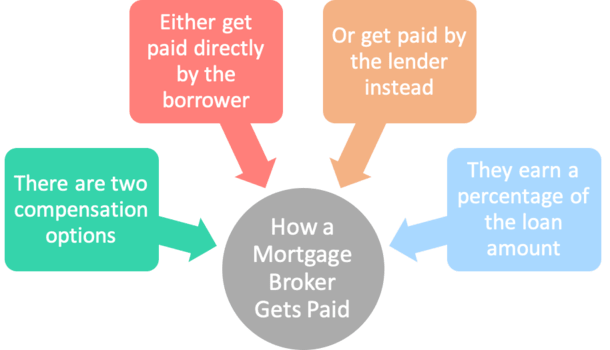 In the recent past (before April 1, 2011), mortgage brokers could make money on both the front and back end of a mortgage loan.

Simply put, they could charge a loan origination fee directly to the borrower and also get paid by the mortgage lender via a yield spread premium (YSP), which was the commission the bank or lender provided in exchange for a mortgage rate above market.

In short, the higher the interest rate, the more YSP the broker would receive from the lender.

YSP was also referred to as “par-plus pricing”, “rate participation fee”, “service release fee”, and many other variations.

Brokers had the ability to make several points on the back end of a loan, potentially earning thousands of dollars, sometimes without the borrower’s knowledge.

They could also collect money on the front end of a loan via out-of-pocket closing costs like loan origination fees and processing costs, which the borrower paid directly.

For example, back in the day it was possible for a broker to charge one (or more) mortgage points upfront for origination, receive another two points on the back from the lender, and also tack on things like loan processing fees.

And it could be even higher for jumbo loans. Prior to the housing crisis, it wasn’t unheard of for brokers to make massive commissions like this.

You’d hear about them asking for “max rebate” on the back end, which was the limit wholesale lenders would pay out, while still convincing the borrower to pony up an origination fee on the front end.

As a result, brokers could essentially be paid twice for the same transaction.

The beauty of it was the yield spread premium came in the form of a higher mortgage rate, so it didn’t even look like a fee or a cost to anyone – it just meant the borrower had a slightly higher mortgage payment for the entire loan term.

In other words, the borrower was saddled with a higher rate for the life of their loan and may have also paid a commission upfront, without realizing it.

Had the broker just charged the upfront fee and nothing else, the borrower may have received a mortgage rate of say 4% instead of 4.5%.

In hindsight, it probably didn’t matter because most of those loans didn’t last more than a few years (or months) before they were refinanced or foreclosed on. Eek.

As noted, the controversial practice outlined above was outlawed in 2011.

The Fed came in and changed all that by effectively banning yield spread premiums, and now mortgage brokers can only get paid by the borrower OR the lender, not both.

That doesn’t mean they can’t still make a lot of money per loan, it just means the way they can get paid via the wholesale mortgage channel has been limited.

In other words, they either charge you directly to close the loan or they get paid by the lender and you pay for that commission indirectly (not out-of-pocket at closing) via a higher interest rate.

If charging directly, the borrower pays for the broker fee or origination fee, loan processing, and so on. Compensation can also vary from loan to loan.

If being paid by the lender, it’s similar to YSP, but brokers must now choose a compensation plan upfront with each lender they work with, as opposed to charging different amounts on each loan as they see fit.

And they usually must stick with that compensation plan for three months before they can change it again.

But they may select a higher compensation structure with Bank B that gives them 1.5% on each closed loan.

Assuming the loan terms and cost are the same, they can send your loan to Bank B for a higher commission, as it won’t affect what you ultimately receive.

However, a different broker may decide to set all their compensation levels at 2%, and if you happen to work with them your interest rates may be higher across the board to account for their higher commission.

So you kind of have to shop mortgage brokers too in order to find the one offering the lowest rate/costs.

In other words, you can still get a raw deal, or at least a not-as-good deal. The good news is they can no longer get paid on both the front and back end of the loan.

But you should continue to be vigilant and look over your loan documents to ensure you aren’t being overcharged.

In short, you’ll want your broker to send your loan to the bank that offers you the lowest interest rate, not the one that gives them the highest commission.

What Is the Mortgage Broker’s Commission? And How Do I Find It?

So you’re applying for a home loan and want to know the mortgage broker’s fee. I don’t blame you, it’s important stuff.

But if the interest rate and combination of closing costs are favorable relative to other banks/lenders/brokers, it doesn’t really matter what they make.

Still, you should know and you have a right to know. Here’s how to find out.

When signing loan disclosures early on in the process, look out for a “Loan Brokerage Agreement” form that spells out their commission, and whether it’s borrower- or lender-paid.

The screenshot above is an example where a broker earned $8,775 via the lender for facilitating the loan. Not bad for one loan, eh?

To figure out how much they’re making on a percentage basis, simply take the compensation amount and divide it by the loan amount.

The loan amount in this example is $780,000, making their compensation 1.125%. It’s reasonable as they could charge 2% or more depending on the wholesale lender they partner with.

You can also find the broker fee on the Closing Disclosure (CD) and the ALTA Settlement Statement when it’s time to sign docs and close your loan.

Okay great, so what do brokers make?

But as mentioned, we have to subtract the costs of doing business, which are variable. From there, you’d have your profit per loan.

Not a bad take for helping people get mortgage financing, depending on how many loans are closed each month, and what expenses are involved.

As you can see, mortgage broker salary will definitely vary based on the size of the loans they typically close. In more expensive areas of town (or the country), brokers might make six-figures or much, much more.

While those in lower-priced metros could make significantly less if costs are still relatively similar.

Additionally, brokers who focus on mortgage refinances might have higher loan volume than those who help home buyers purchase real estate, as the latter can be harder to come by and slower to close.

Of course, if they partner with a local real estate office or two, they have the ability to generate a ton of purchase loan business too, so it’s hard to say either specialty would be more successful universally.

Their average income will also depend on the financial institutions they choose to partner with, as compensation structures and points per loan will vary across different mortgage lenders.

One aspect of a mortgage broker’s job is linking up with lending partners that are good at quickly closing loans, while also offering competitive pricing. As such, these partners can greatly affect a mortgage brokers salary.

[How to get a wholesale mortgage rate?]

The 360 Mortgage Group believes brokers will be able to adapt to the compensation changes, and if you know anything about the mortgage business, new rules are typically circumvented overnight.

So brokers can simply pick up a specific compensation-based rate sheet they’d like and be on their way.

But the rule change will probably reduce average incomes for loan brokers, since they won’t be able to take a little from both the front and back of the loan.

Receiving compensation from just one entity, as opposed to two, means it’ll be more difficult to charge an excessive amount per loan, though not impossible.

This is relatively good news for home buyers and existing homeowners looking for refinance who will hopefully enjoy lower mortgage payments, but bad news for mortgage brokers, who continue to lose market share. It could also dent their total pay.

It’s recommended that you shop for a mortgage by gathering rate quotes online, at your local bank/credit union, and also via a mortgage broker or two.

You’ll never know who might have the best rate/terms unless you actually take the time to shop around!

Read more: Why use a mortgage broker?

12 thoughts on “How Much Do Mortgage Brokers Make? No Salary Means The Sky Is the Limit”