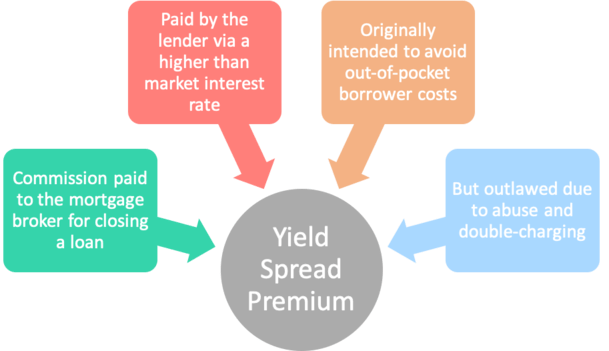 The “yield spread premium,” or YSP as it was known in the industry, was a fee paid by a mortgage lender to a mortgage broker in exchange for a higher interest rate, or an above market mortgage rate.

Though the borrower may have qualified for a mortgage at a lower interest rate, the broker or loan officer could charge this fee and give the borrower a slightly higher rate in order to make more commission.

This practice was originally intended as a way to avoid charging the borrower any out-of-pocket fees, as brokers could earn their commission AND cover closing costs with the YSP.

However, as expected, the yield spread premium wound up as just another fee the borrower got stuck paying. So instead of being charged YSP only, borrowers were often charged YSP and an upfront origination fee.

Effectively, borrowers were charged twice on their home loans, which explains why this practice has been outlawed.

Careful You Aren’t Charged Twice on Your Home Loan


The big problem with yield spread premiums was homeowners were charged twice on a single transaction.

This meant a borrower taking out a home loan could be charged on the back-end via YSP and on the front-end via out-of-pocket costs like a loan origination fee.

If so, you were effectively just being double-charged for the same service. It’s like going to a retail store and paying the retail price for a product and also a separate fee to the person who sold it.

Of course, a broker may have split up his or her fees by charging a half percent via the yield spread premium and another half percent in loan origination fee.

This wouldn’t mean the broker was necessarily charging you twice. Their commission was simply being broken up, with some money coming out-of-pocket and some coming in the form of a higher mortgage rate.

But often it just boiled down to charging borrowers more for the home loans they took out.

If you bought down your rate, there wouldn’t be any yield spread premium since you’d actually be paying discount points to lower the interest rate on the back-end.

Of course, this meant you’d need to pay a commission out-of-pocket as well, so it could get pretty expensive if you went after a super low rate.

Also note that the YSP verbiage varied, and yield spread premium may have read as “par-plus pricing”, “rate participation fee”, “service release fee” and so on.

Yield Spread Premium Was Used for No Cost Loans

Banks and brokers also used to charge a yield-spread premium as a way of providing a no closing cost loan.

Basically, the bank or broker would charge a YSP large enough to offset any upfront fees the borrower would have to pay, and still end up with enough money to make a decent commission as well.

The borrower won’t have to pay the $3,500 in fees as it will be subtracted from the broker’s YSP of $8,000, leaving the broker with $4,500 net commission. It sounds like a good deal, but the interest rate the borrower ultimately receives may be substantially higher than it would be at the par rate.

This means the borrower will have both a higher monthly mortgage payment and pay much more interest throughout the duration of the loan term.

There was a lot of controversy surrounding yield spread premiums, and a long fight between mortgage brokers and institutional lenders.

The issue at the time was that brokers had to disclose the YSP they charged before closing, whereas large lenders could avoid doing so.

Lenders could delay disclosure as their yield spread may not have been determined until a later date when the loan was sold on the secondary market. Simply put, if it was not yet known, it couldn’t be disclosed.

Update: As a result of the ongoing mortgage crisis, yield-spread premiums have been banned, and have essentially been replaced by lender credits.